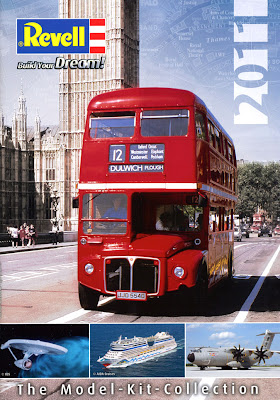 Mat Irvine reports
I made a quick trip to the London Toy Fair at the end of January, and one of the biggest surprises of my visit was to find Revell-Germany announcing a 1:24 scale London Transport RM Routemaster double-decker bus plastic kit. Often suggested as an idea - and I recall there were rumours back in the 1970s that Airfix was planning such a venture - but the general consensus was that it would have been far too large a kit, and so that put the kibosh on the concept. 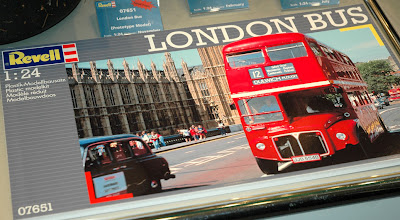 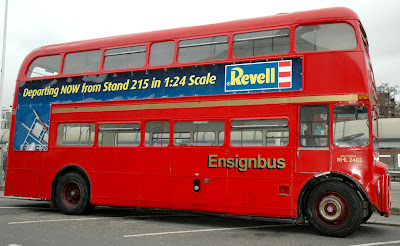 Is a big-scale kit too big?
In fact Airfix was also likely to have released a 1:24 scale Mosquito around that time, but it too was shelved as being ‘too big’, and instead released much later in 1:48. Of course, we do now have an Airfix 1:24 scale Mosquito, and large-scale kits in general are not uncommon. Revell has issued giant kits of oil platforms, bucket-wheel excavators and the shuttle launch pad, and it already has a big bus in the form of the 1:24 scale Cityliner coach, which admittedly isn’t as tall as an RM Routemaster, but is certainly longer. Then there are the 1:8 scale car kits from Monogram, which also has large bombers in 1:72 and 1:48, so all-in-all a 1:24 scale RM doesn’t seem too extravagant at all. 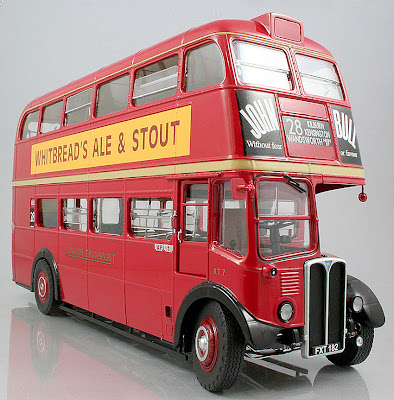 Diecast alternative
And not forgetting Sun Star, which already makes ready-built 1:24 scale RMs in a variety of marking schemes, but these of course are diecasts, not kits. All of which means that the Revell offering will be appreciated all the more by model makers.
The Revell Routemaster bus
However, we don’t have too much detail as yet - Revell had pictures on show at the London Toy Fair, but the bus does grace the cover of the 2011 catalogue, and a mockup was on display. A real RM bus stood outside the Olympia Exhibition Halls, and this was in authentic London Transport colours. Interestingly, for years Revell used a similar bus  in Germany as a travelling exhibition stand, though this was painted blue, rather than tourist-London bright red.
Routemaster release date
Frustratingly, we will have to wait well until after summer 2011 before the kit is released - it is scheduled for Q4, so it’s months away yet. There is one tiny thing to point out if you have the 2011 catalogue and read the bus listing (page 44). The copy reads: ‘1:32 scale’. But it’s not  - the bus will be to the larger, 1:24 scale. 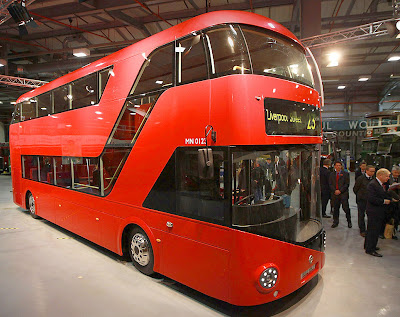 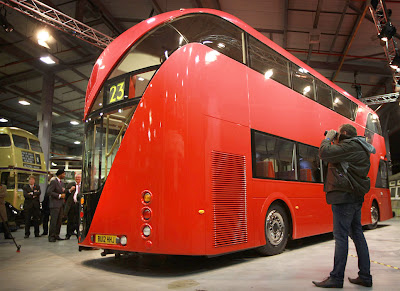 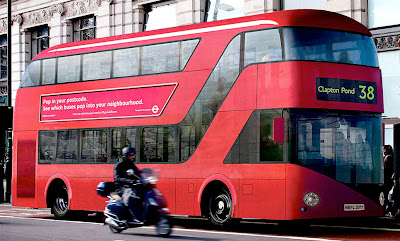 Into the future
If the Routemaster is a London icon of the past, then the new double-decker, commissioned by London Mayor Boris Johnson, is likely to be the new star of crowded metropolitan streets. A mockup was recently displayed at the London Transport Museum in Covent Garden, and it really is a knockout design. Swoopy tinted glass, a clean, green eco-power system, and a familiar appearance in updated designer clothes looks set to carry on the ‘Big Red Bus’ tradition well into the future. So here’s a call to you manufacturers out there: let’s see a kit (and a diecast too, please) of this item - pronto!
The pictures show, top to bottom:
1  Revell catalogue 2011, starring the RM bus kit.
2  Revell bus kit box, pictured at the London Toy Fair 2011.
3  The real thing, seen outside the Toy Fair exhibition.
4-6  New-style double-decker, launched at the London Transport Museum by Mayor Boris Johnson, seen at right in pic 4 - he’s the one with the blonde hair.
There’s a neat Corgi 1:50 scale diecast here.
London buses and other gorgeousness from Sun Star here.
If you’re in the big city, the London Transport Museum is well worth a visit here.
Thanks to Diecast Ramblings for the Sun Star RM pic.
Email ThisBlogThis!Share to TwitterShare to FacebookShare to Pinterest
Labels: Boris Johnson, double decker, London bus, London Toy Fair 2011, London Transport Museum, Revell, Sun Star
Newer Post Older Post Home