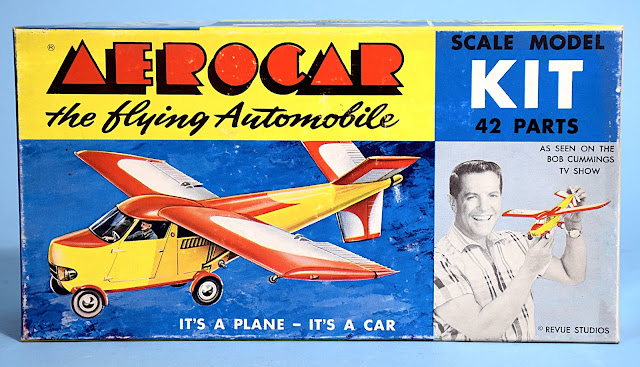 IF YOU READ ALMOST ANY popular-science magazine from the 1950s, you will see that by 2018 we ought to be driving flying cars, even taking vacations on the Moon.


Mat Irvine: Yes, there have been recent developments with cars that can fly, but we still get stuck in traffic jams at ground level. However, there was one flying car that did get off the ground, and that was the Taylor Aerocar. This flew as long ago as 1950, and even then the designer, Molt Taylor, was on his way to developing more sophisticated versions.

But development floundered, and by the late 1980s the project was all but abandoned. The remaining Aerocar Mk III was acquired by the Museum of Flight in Seattle, and while there recently, I took a close look.

Besides the actual car (or plane) there was a display of associated artifacts in the Museum, including models made from the Gladen Flying Automobile kit (below), which is a rare find today. The box also depicts a still from The Bob Cummings Show, in which the Aerocar featured. The show was a sitcom that ran on US TV from 1955-59.

The Museum of Flight's model display shows several variations of the basic Aerocar design, including an autogyro (below left) and a military design, called the Aerojeep. There's also a diecast model of a Jaguar E-Type, which inspired the nose redesign for the Aerocar Mk III. 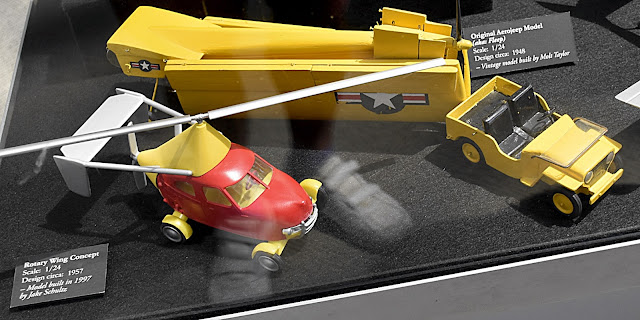 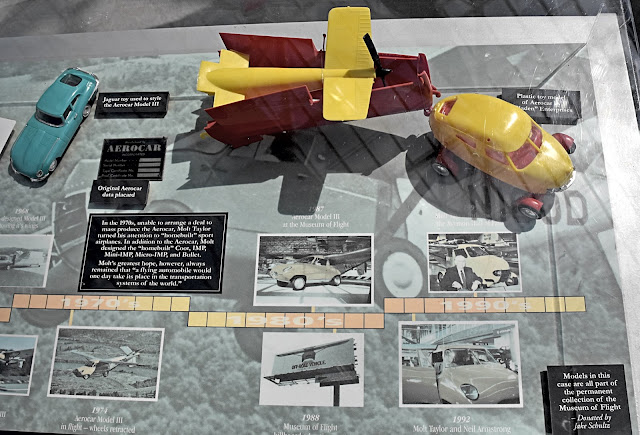 The preserved Taylor Aerocar Mk III (below) on display at The Museum of Flight. The automobile part is the red section – the extended tail, propeller, and two wings are needed to allow for the flight configuration. 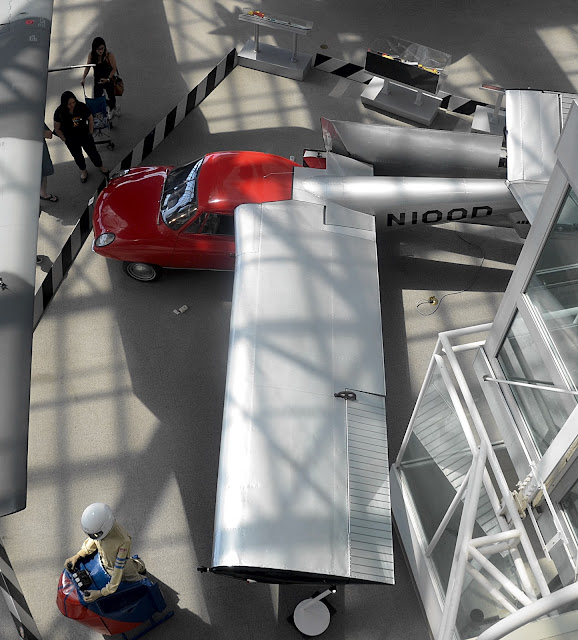 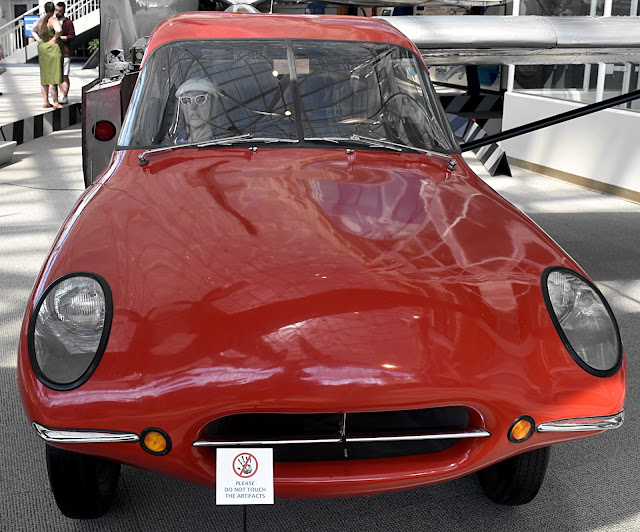 Models (below) on display next to the Aerocar.

Here I am (below left) taking in the lines of a futuristic idea that aimed to make flyers of us all.

SMN note: Gladen Aerocar kits are definitely on the rare side, though they occasionally appear on auction sites. Here’s what Worthpoint has to say about such a kit:

The kit is “…a scale model or toy created by Gladen Enterprises Inc. The exclusive use of Aerocar designs and trademarks was authorized by Aerocar, Inc.

“Molt Taylor, the designer/builder of the Aerocar, had these produced as a promo model to be given to prospective buyers of the full size Aerocar, much like the automakers had for their various models and years.

“The production of the Aerocar never got off the ground, causing the distribution of these items to the authorized Aerocar dealerships to stop. Very few ever made it to a dealer. Gladen, however, finished the initial production of the model and placed them in different boxes. Marketing was done to toy stores and model builders.

“The initial design was the red and yellow - in the box shown above. The second model was green and yellow and was in a similar box with Bob Cummings' picture on it. The third was red and yellow, but the box was a different size and contained all of the components in cellophane bags for model builders.”

Of the kit itself, Worthpoint notes: “…The plastic is like new, the box and information page however has been wet or near moisture and are damaged. In the tail section is the original rubber band and it is broken.

“It really has not been played with or used other than to take these pictures for this ebay listing. thank you all, good luck bidding.” Unfortunately, we don’t have a record of the price achieved.

“This example is in very good condition. It has one reproduced hubcap that I made and is missing a towing wheel cover from the leading edge of the left wing as shown in the pictures.

“Also demonstrated in one of the pictures is the rubber band actuated prop. It’s possible that the prop could be wound tightly enough to make the toy move but I didn't want to try it. All in all, this is a remarkable and accurate model of the Taylor and as I understand it, Gladen Enterprises was the only manufacturer ever authorized to replicate this in kit form.

“This toy is scarce as hens’ teeth so don't let this one 'fly by’”.

Or if these two examples don’t work for you, try the fridge magnet (below), seen recently on ebay.

A Drive In the Clouds (below) is the definitive book on the Taylor Aerocar. Author Jake Schultz built two of the scale models at the Museum.