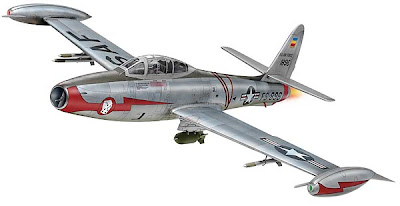 Good news for larger-scale jet fans: the Revell 1:48 Thunderjet is now coming into the stores. It's a nice addition to models of the early jet-age era.

The real thing became a great success in the Korean War, though early F-84s had been less successful. The jet only came really 'right' with the 1951 'G' version, featured in this Revell kit. The F-84 notched up a string of 'firsts' for a strike fighter: in-flight refuelling, nuclear weapons capability, and being the first aircraft used by the USAF Thunderbirds display team.

Should you build the Revell or Tamiya F-84G? Either or both, as each of them makes up into a handsome scale model. They are crying out for a diorama though: a miniature arming-up scene would look terrific.
Email ThisBlogThis!Share to TwitterShare to FacebookShare to Pinterest
Newer Post Older Post Home