Making money: Is there gold in your garage? 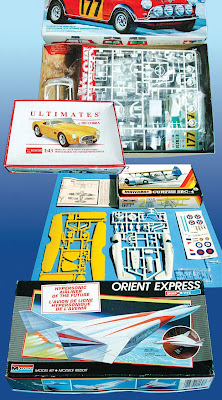 If you’re anything like me, collecting model kits seems to go at a rather faster rate than actually building them. So far as available time is concerned, many people are at a serious disadvantage, and actually complete no more than half a dozen items a year.

What that means is that storage space for all those boxes can become a problem sooner or later. This happened to me a while ago, when I went into the garage, looked at the floor-to-ceiling ranks of kits stacked at the back and thought, “There’s no way I’m ever going to build that lot”.

So, what to do? Well, like many others have done, I decided to give eBay a whirl. I have to say that there was lot more to it than meets the eye – descriptions, pricing, photos, postal rates and more. And all have to be tackled and mastered. It’s quite a steep learning curve.

But the upside is that once you get going, you find that there really is a world-wide market for your cast-offs and, better still, most people are interesting to meet, even if it’s only by email. In the six months of trading it took to empty that garage, I got to know people as far apart as Slovenia and South Africa.

The best discovery of all was that those unbuilt kits had a value (albeit fairly unpredictable!) and that they went to keen model makers, who had the time and interest to do better things than leave them mouldering away in a garage.
Email ThisBlogThis!Share to TwitterShare to FacebookShare to Pinterest
Labels: collectibles, eBay, selling kits
Newer Post Older Post Home