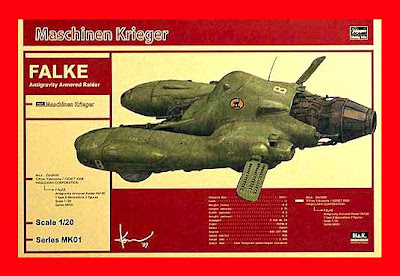 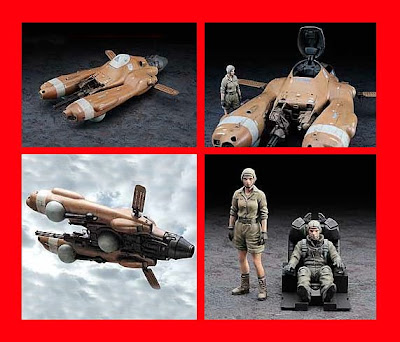 There are plenty of Terminator, Robocop, Star Wars and Star Trek kits out there, enough to satisfy all but the most rabid fans. But when it comes to original designs, or models representing lesser-known works of science fiction, there’s a dearth of material.

Well, here comes Hasegawa to help the situation, with the first of several new releases slated for 2009. The 1:20 scale Falke anti-gravity raider was shown off at the Nuremberg Toy Fair a few weeks ago, and it looks terrific, with nicely modelled figures, standing in off-duty shorts or sitting in a flight suit.

The Falke is part of the Ma. K (Maschinen Krieger) sci-fi universe, originally created back in the 1980s, by Japanese artist Kow Yokoyama. There have been various legal disputes over ownership, but now Hasegawa has started new development. For kit-bashers the Falke is a blessing, as it’s packed with interesting detail bits you could use on other projects. Or if you build as-is, then you’re free to choose any colour scheme you like – I think a satin-black night-attack version would look the biz.

No complaints about the big scale chosen, but let’s hope that Hasegawa also release versions in smaller standard scales, such as 1:35, 1:48, and 1:72. The Falke would look terrific lined up with a squadron of present-generation stealth fighters. When built, it will measure some 286 mm long, and should be available through retail stores, or online outfits such as Hobbylink Japan.