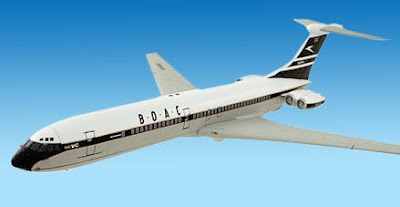 The VC-10 was a British jetliner that was good to fly, and quiet for passengers. Despite these plus points, it was not a huge commercial success, partly due to somewhat higher fuel consumption than its main rival, the Boeing 707, and partly due to political strains that were part and parcel of the UK industrial scene in the 1960s.

Corgi’s 1:144 model shows the first VC-10 to enter service with BOAC (British Overseas Airways Corporation) in 1964. Sad to say, the aircraft crashed five years later, after it had been sold to Nigeria Airways.