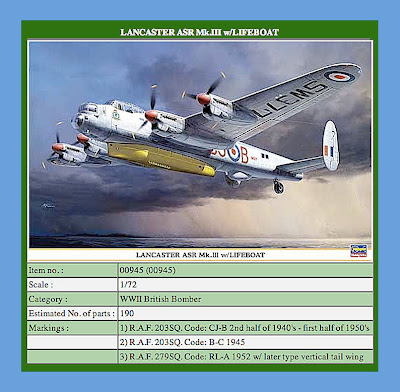 The very first Lancaster kit was produced by Airfix, way back in the late 1950s. Since then, the ‘Lanc’ has been produced in a variety of scales and variations. Tamiya’s 1:48 Dam Buster is one of the biggest and best, while this ASR Mk III from Hasegawa is one of the most interesting.

Designed for air-sea rescue duties after World War II, the ASR Mk III was unusual for its main load, a full-size lifeboat, filling the entire length of the modified bomb bay. When released, the lifeboat parachuted into the sea.

The 190-part kit would make an interesting addition to any collection, though it's a pricey purchase at around £55.99 GBP ($80.46). You can order one from Hannants where they are now in stock.
Email ThisBlogThis!Share to TwitterShare to FacebookShare to Pinterest
Newer Post Older Post Home