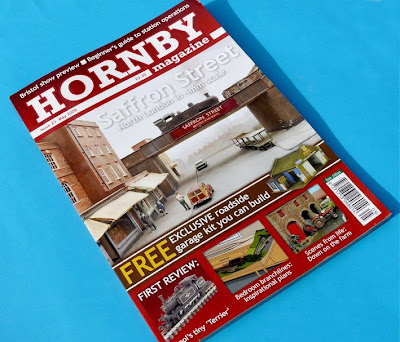 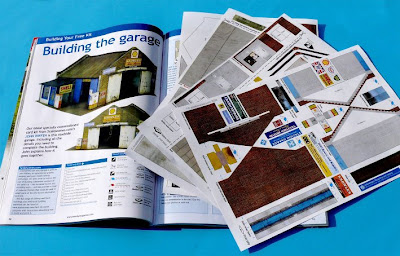 Here’s a look at the May issue of Hornby Magazine. It’s a treasure-trove of interest for British model rail fans, with a spectrum of articles covering most aspects, mainly in 00 gauge, but with nods to other scales as well.

As an aside, it’s a sore point with me that the UK should be at odds with the rest of the world in its use of model rail scales. I have many nice locomotives from distant shores, and have always felt it’s such a shame that I can’t display my H0 (1:87) US Big Boy next to my 00 (1:76) UK Mallard in a meaningful manner. Ho hum!

Rant over, and back to the magazine. Of particular interest (as we ran a story on it not long ago) is the article on Oxfordshire’s Pendon Museum, which houses one of the most fascinating miniature rail exhibitions anywhere.

Icing on the magazine-cake is that Hornby has hooked up with internet outfit Scalescenes to provide a FREE 00 gauge model garage. It’s a card model that builds into a typically grimy locally-owned garage from the 1960s. It’s a beautiful piece of work, with attention to detail that’s second to none. Graphic designer John Wiffen of Scalescenes has really done the biz on the signs and adverts that covered the walls of garages like this. Hornby Magazine has played its part by making the garage pages perforated, so you don’t have to wreck your mag when pulling them out, though a light scalpel cut will help detach them perfectly. Well done all!

The two pictures show Hornby Magazine's May cover, and the pulled-out pages that make up into the garage. You can visit Hornby Magazine online here. Scalescenes offer many downloadable buildings, which you see by visitng Scalescenes here.