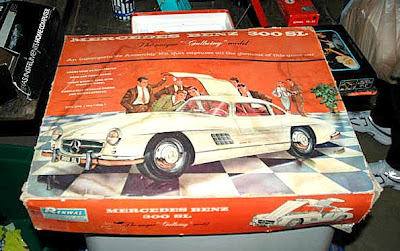 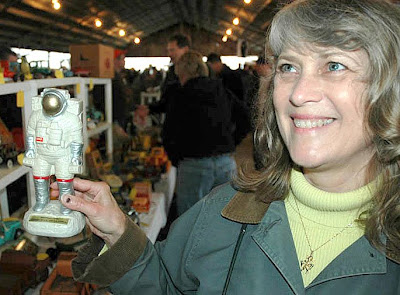 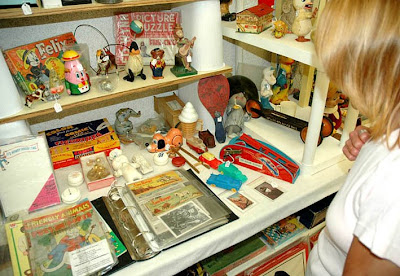 Kane County sits west of the Chicago metropolis and hosts the twice-a-year Toy Fair at its fairground, something (a fairground, that is) that no self-respecting American town can do without. I was last there in October 2008, but new buildings have sprung up since, meaning that a lot of what used to be held in, frankly, the animal sheds, could be moved inside. But two such sheds remain in use. They are otherwise reserved for ‘Cattle’ and ‘Swine’ (‘Rabbits’ was not in operation this year!). Apparently Kane County’s Toy Fair used to be a lot larger than it is now – but it’s still pretty big.

The Toy Fair does more or less what it says on the tin. It’s a fair for the selling of toys - plus models, dolls and other collectibles - and stall after stall has a wide variety of bits and pieces that are likely to be junk to most people, but maybe a treasure to others. We all set off - me and my other half Georgy, Dean Milano and wife Gay, and were joined by Gay’s daughter Kim and her elder son, Jack, all of seven years old.

It didn’t look exactly promising as the forecast was for a downpour, and with rain threatening when we arrived, by the time we got under cover, it was coming down like stair-rods – but that meant all the more time for browsing!

You never know what you might find at these sorts of fairs – plus not being ‘from around these parts’ they are mostly going to be different from the sort of finds at a British equivalent. So you wander from stall to stall, peering at stuff that may be hidden under other stuff, or tucked away under the table. Then you bargain. Using the Middle Eastern principle that the price marked is only a rough indicator and should never be taken at face value, the first question should always be, “What’s your best offer on this?”, followed by the sort of look that indicates that it had better be a ‘good offer’. Actually, most are just that. Invariably when I’d seen something at $25, and having asked the question and expecting $20, and $18 came back (as it did on one occasion)... well, it would be churlish to turn it down! So by the end of the day - and by now with the Sun out - a few more items had been added to the Mat Irvine Collection.

The pics show (top) a kit I’d never seen before, at least in this box – the original Renwal kit of the Mercedes 300 Gullwing in 1:12 scale. Gay found me an astronaut (middle), though I didn’t take her up on the offer! Georgy (bottom) gazes at just one stall’s wares.
Email ThisBlogThis!Share to TwitterShare to FacebookShare to Pinterest
Labels: Kane County Toy Fair, mat irvine, Mercedes 300 Gullwing, Renwal
Newer Post Older Post Home