ASTON-MARTIN TO RACE IN FORMULA 1 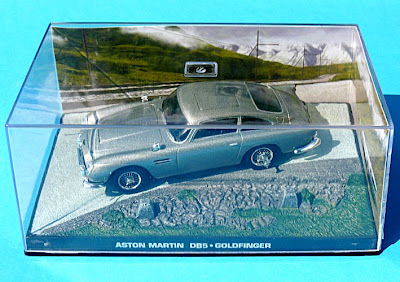 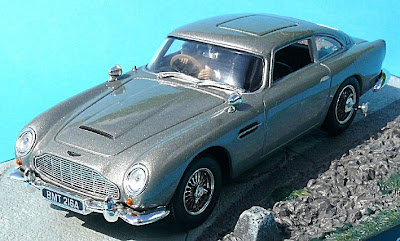 There’s winning news for Aston-Martin fans today - the company is planning to enter Formula One (F1) racing from 2012. It’s exciting too for SMN, as Aston-Martin is based at Gaydon, not too far from the SMN workbench, near Oxford, UK.

A-M is already into sportscar racing in a big way, and this will continue, with preparation by top racing outfit Prodrive. In fact, A-M cars will be running in F1 from 2010 under the Prodrive label, before changing to the fully-fledged Aston-Martin F1 name two years later.

For Aston-Martin model fans, there's plenty of choice out there, and one of the nicest diecasts around is the big 1:18 scale Autoart DBR9 in Le Mans racing finish (top picture). It’s a jewel-like production, packed with detail, and just made for display. In 1:43 scale, an attractive James Bond DB5 from the movie Goldfinger (lower pictures) was offered with an Italian partwork that has since included a whole range of well-known and not-so-well-known vehicles from the Bond movies - from a Lotus submarine-car to a Citroen 2CV.

These come up from time to time on eBay, so it’s worth keeping an eye open. Dozens of Bond vehicles have already been released so it’s probably a bit late to subscribe to the whole series.

Details of the Aston-Martin’s F1 ambitions are at Autocar magazine’s website here.