MAT'S US DIARY: THE SPOILS OF KANE COUNTY 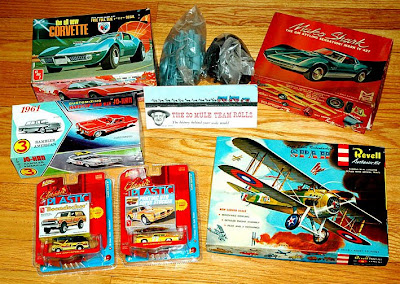 Mr J thought you’d like to know what I’d bought at the Kane County Toy Fair, so here’s what’s going to be filling my travel bag. In the picture, from top left to bottom right:

The kit in bags marked ‘The 20 Mule Team Rolls’ comes from the TV series Death Valley Days, sponsored by the Borax Corporation. This ‘generic western’ was introduced by the ‘Old Ranger’ - picture on the plans - one of whom was Ronald Reagan, and featured different stories each time. This kit is 1:48 scale and includes 20 mules and three wagons.

The Mako Shark was one of General Motors’ major show cars, elements of which were utilised in later Corvettes, such as the one on the left. This kit is built, but may be restorable - and anyway, the box is nice!

The box for the Jo-Han 1961 Rambler is just that - a box - but there is a growing market in mint boxes. Anyway, I have an old kit of this in a tatty box...

The Johnny Lightning ‘Classic Plastics’ are 1:64 scale cars, versions of which were made as AMT kits, and you get a miniature version of the kit box. These aren’t exactly old, but there weren’t exactly expensive either - two for just $5.

I’m not really an aircraft collector, but these 1:28 scale Revell WW1 aircraft have interesting boxes. I already have the Fokker Triplane, so with this one, there’s only one still to get. There was a fourth kit made in later years, but the box is far less interesting.