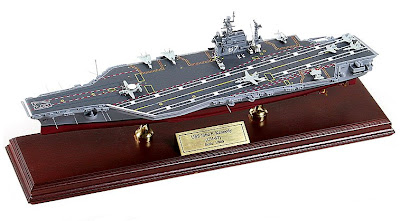 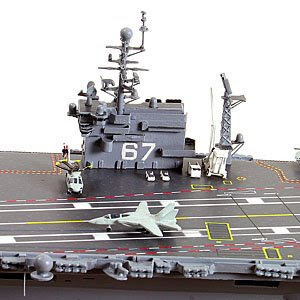 On May 27 1967, Jackie and Caroline Kennedy christened the new carrier, some four years after John F. Kennedy’s assassination in Dallas, Texas. The ship (aka ‘Big John’) was basically a Kitty Hawk-class design, but with conventional engines instead of a nuclear power plant. The JFK went on to serve for almost four decades, before being finally decommissioned in 2007.

For model builders, aircraft carriers represent a particular challenge, involving making and painting tiny aircraft as well as the ship. US supercarriers like the JFK had different types likely to be parked on deck, from fighters to helicopters.

But there is a short-cut for collectors rather than builders, and that’s to buy a ready-built model, and here the auction site eBay has come to the rescue. There are several 1:800 scale JFKs for sale at a Buy-It-Now price of $159.00 USD (£100.00 GBP), which gets you a 15 inch (381 mm) long model, complete with aircraft on deck, and mounted on a wooden plinth with a brass name plaque. It looks good at that price.