X-PLANES: FLYING INTO THE FUTURE 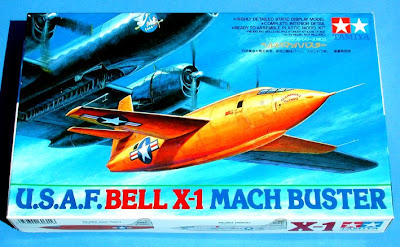 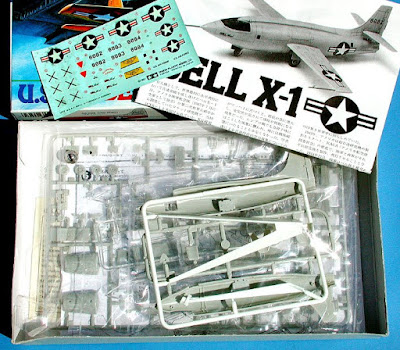 This is the first in a series that will track models made of the US experimental aircraft series that began back in the 1940s, with the Bell X-1. This was a small single seater rocket-plane, and the first crewed air vehicle that broke the (at the time) much feared ‘Sound Barrier’. Various crackups in mid-air had previously convinced many observers that the speed of sound was an invisible wall, that would kill anyone who tried to fly past it.

In fact of course, they were wrong, and breaking the sound barrier was a technical issue, rather than some hidden bogey waiting to pounce, and Chuck Yeager’s record-breaking flight in 1947 proved it once and for all.

As for models, there are several available in various scales, but the one we show here is the 1:72 Tamiya offering. It’s a neat and detailed kit, with an unusual choice of a supplied clear plastic fuselage half. This allows you to view various interior features such as fuel tanks, cockpit detail and oxygen tank, which is supplied as a shiny metal ball.

The Tamiya X-1 makes up into a nice little display model, though availability comes and goes. The pictures here show the ‘classic’ box design - newer offerings are in a simpler style. When in stock, the X-1 is available as the ‘Mach Buster’ from most suppliers, including Hannants at £8.50 GBP ($12.84 USD).
Email ThisBlogThis!Share to TwitterShare to FacebookShare to Pinterest
Labels: Bell X-1, Chuck Yeager, Hannants, sound barrier, tamiya
Newer Post Older Post Home