ALL THAT GLISTERS IS NOT GOLD 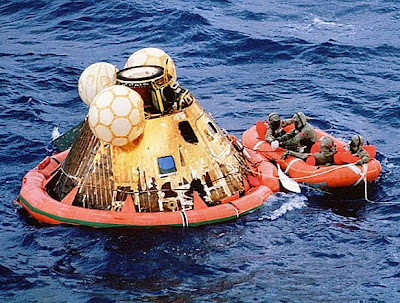 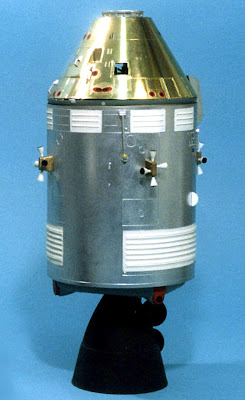 Here is an odd story, which goes way back to when the 1:32 scale Monogram Apollo CSM kit was new in 1970. It was issued with the Command Module (CM) plated in ‘gold’. In reality this was a ‘gold’ lacquer sprayed over a chrome-plated finish (which is actually a fine aluminium mist, deposited in a vacuum chamber, but comes out with a chrome-look, and is commonly used on model car grilles and bumpers.)

However, the gold finish was a misinterpretation of NASA photographs that showed the returned CM bobbing on the ocean. The CM had indeed taken on a gold colour, but it came from the extreme heating of re-entry which had turned the exterior to a goldish tinge. See the photo (top) which shows the Apollo 11 CM.

In reality, at all stages before re-entry Command Modules had a ‘chromed’ appearance, where strips of shiny Mylar-type, flame-retardant tape had been applied - which also shows up on the left of the CM in the photo). In the model, this resulted in the ironic situation that as Monogram had to chrome-plate the CM part before gold lacquer was applied as a top coat, it would have been better to have stopped there!

The kit has been reissued as part of both Revell Germany and Revell US Apollo 40th anniversary lineup, (the only kit shared between the two divisions), though both feature ‘Revell’ logos.

However, and this is even odder, whereas Revell-Germany has used neither gold lacquer nor even chrome plating, Revell-US presents the kit exactly as the Monogram original, complete with a gold-coloured CM - and both kits were produced in the same Chinese factory!

If you want to go the chrome route with the Revell-Germany issue, this can be reproduced either by using Alclad Chrome paint (sprayed over gloss black, otherwise it will not come out chrome), or by using strips of chrome Bare-Metal Foil.

Alternatively, the gold lacquer can be removed from the Revell-US issue using rubbing alcohol or similar, enough to remove the lacquer but not the chrome plating.