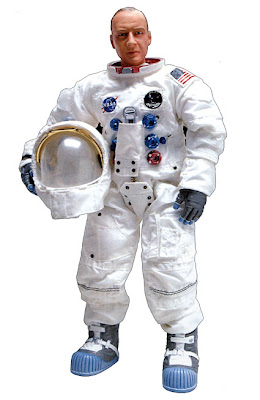 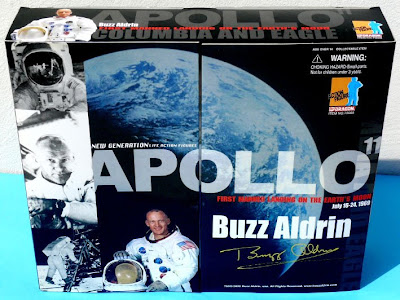 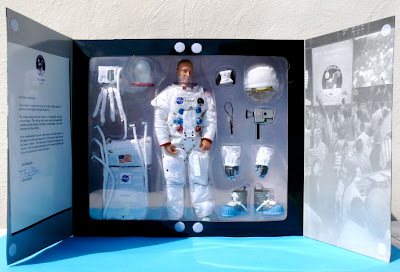 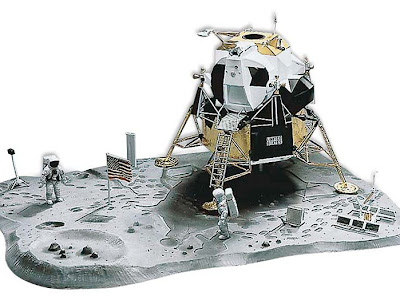 Speech researcher Chris Riley declared the other day that his studies prove that Apollo 11’s Neil Armstrong really did lose the ‘a’ in “That’s one small step for a man, one giant leap for Mankind”. This despite Armstrong’s insistence that he actually said it! Other research has come to a similar conclusion, but SMN doesn’t really care - Armstrong put the first bootprint on the Moon, and that’s what counts.

Of the two Apollo 11 Moonwalkers, Armstrong has always been the quiet one; the second man on the Moon, Buzz Aldrin, has been a lot more communicative. And that shows up in the memorabilia available - so Dragon produced a Buzz Aldrin astronaut model, not one of Neil Armstrong. This 1:6 scale figure is something of a collector’s item these days, with eBay auctions asking $250 USD (£155 GBP) or more. SMN Towers has one in the vaults (see pictures above) and the package is very well done, with an open-out box, a fascimile signed letter from Aldrin, and some very nicely detailed equipment.

The Aldrin figure would look terrific in any Apollo model display, as would the Revell 1:48 Lunar Module kit (bottom picture). You might also enjoy the great-looking Buzz Aldrin site, which has a fascinating intro video.