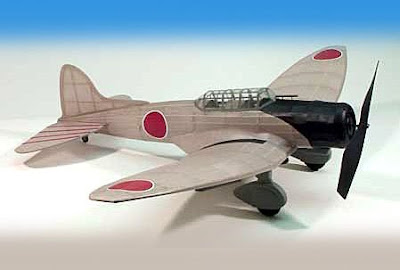 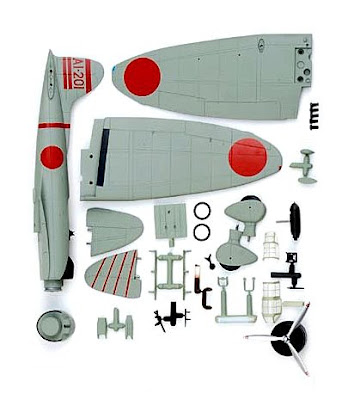 The Aichi D3A, codenamed Val by the Allies, was Japan’s most important dive bomber in the early part of World War 2. Like the German Ju-87 Stuka, the slow-flying Val had a fixed undercarriage, with the wheels enclosed in aerodynamic spats. After early development, the Val became a highly manoeuvrable machine that was capable of fighter-like agility.

Vals were deadly weapons in 1942 - apart from bombing the aircraft carrier USS Yorktown at Midway, they had also sunk the British carrier HMS Hermes in the Indian Ocean earlier that year.

There are plenty of Val models around, but one of the most interesting is the free-flight laser-cut balsa kit from US manufacturer Dumas (top picture). It’s a big model, with a 30 inch (762 mm) wingspan (making it just under 1:20 scale), with a rubber-band powered prop for flights of several hundred metres in calm air. Take time out to look around the Dumas site - there are some fascinating kits on offer.

Online supplier The Flying Mule offers the hefty 1:48 Marushin diecast kit (middle picture). These kits are pre-painted, with metal and plastic parts. Assembly is simple, and having separate parts makes adding extra detail easy to add in the early stages.

Among the classic 1:72 offerings, the old Airfix kit was not bad at all, though if you want one it’ll mean an online search. There’s a kit presently on offer on eBay here. Note the excellent Roy Cross artwork, typical of Airfix kits of the time. If, like me, you’re a Cross fan, this Val could be worth buying just for the box.