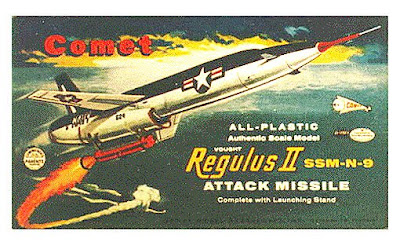 Box art is a big sales feature for almost all kits, especially ones destined for a wider audience. For total enthusiasts you could probably put a kit in an unmarked brown box; for the rest of us, the art makes an attractive sales feature and, if it’s good, a factor that may help us to finish the kit accurately.

Back in the golden age of plastic kits (we reckon that means the 1950s and 1960s) there were dozens of beautifully painted box art renderings to entice interest. My own preferred choices were mostly those that involved an action scene of one sort of another. The Renwal Nike-Hercules featured a few posts ago is a case in point, as is the Airfix Roy Cross depiction of the attack on the Bismarck.

And here we have four takes on the same subject, by Aurora, Comet, Monogram and Revell. The Chance Vought Regulus II was a cruise missile, used by the US Navy in the late 1950s. A single turbojet gave the 11-ton machine a Mach 2 cruising speed, and 54 of them were built. Some Regulus II missiles were fitted with landing gear and were flown as reusable target drones (bottom picture).

Old kits like the ones here are enough to make a collector drool at the mouth. And one good source for such treasures is Rairplane kits, a site that’s packed with tasty treats, here.
Email ThisBlogThis!Share to TwitterShare to FacebookShare to Pinterest
Labels: Regulus II missile
Newer Post Older Post Home