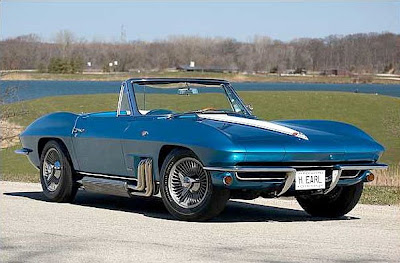 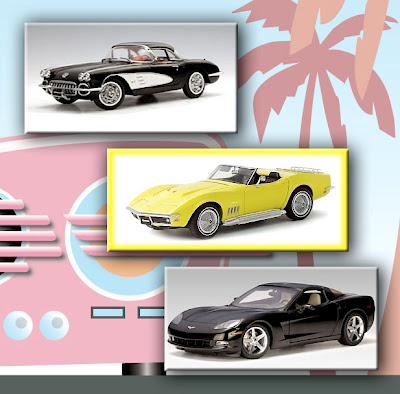 The Chevrolet Corvette has a passionate following, which makes the Mecum Corvette auction today and tomorrow a magnet for any 'Vette fan with money. And the real star of the sale is Harley Earl's personal runabout, a blue Stingray convertible (top picture).

Earl was a powerhouse of mid-20th century US car design and to thank him for his efforts, General Motors presented him with this unique 'Vette in 1963. It had special metallic blue and white-stripe paint, with matching blue leather inside. The engine was a 300-horsepower unit, with massive four-into-two exhausts running down either side.

Earl sold the car after a couple of years, and it has changed hands several times since. But the car is now fully restored, and the quality of the restoration is likely to be reflected in the price achieved at auction, even in these recessional times.

In the model world Corvettes abound, especially diecasts, though SMN hasn’t tracked down a model of this particular car - let us know if you know of one. There are plenty of others though, including several nicely produced 'Vette varieties from Autoart in big 1:18 scale. Three are shown here, representing (top to bottom) Corvettes from 1959, 1969 and 2005.