MAT’S US TRIP REVISITED - WHEN JAMES BOND WENT TO AMERICA 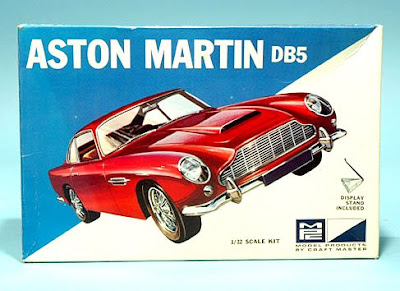 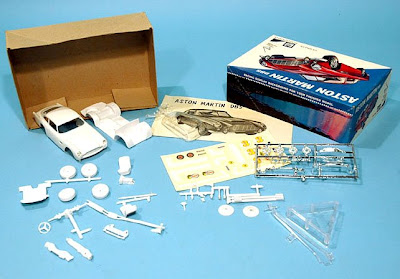 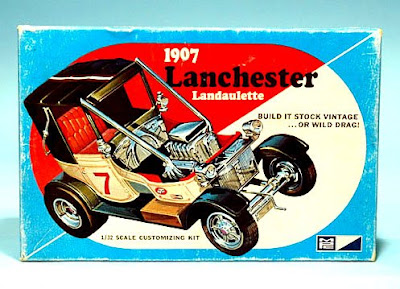 The Airfix 1:32 scale Aston Martin DB5, as modified and issued by MPC for the American market, was one of my acquisitions during my last US trip in April, and especially to the Kane County Toy Fair. I didn’t have a chance to examine the the DB5 fully until my return, but it now deserves a bit more of an explanation.

During the 1960s Airfix and MPC had a tie-in that led to Airfix kits being issued in the US market by MPC, and vice-versa. MPC made mostly cars, so that is what Airfix released for British modellers, including such classic kits as the Mako Shark and Monkeemobile. But for the UK ‘all’ Airfix did was to re-do the box-art using its own logo, while crediting the originators by adding - and this was a rare event - “Created by MPC”.

However Airfix did make - and still does - a much wider range of subjects, and those deemed suitable for the US market were invariably not only re-boxed for the US market, but sometimes had the parts content altered as well. With aircraft, it led to adding figures from the separate Figure Sets. With tanks and military vehicles, some of the Trackside Accessories - which wouldn’t normally fit in with American railroad layouts - were used. For example, the Travelling Crane became a dockside fixture, maybe for lifting seaplanes out of the water.

However, one major problem Airfix had with all its 1:32 scale car kits was that famous subjects such as the DB5 - which was certainly known to a US audience - did not come with features associated with home-grown American car kits from AMT, Jo-Han, MPC, Revell or Monogram. In particular, items such as chrome-plated parts and ‘rubber’ (actually vinyl) tyres were lacking. This led to many modifications for the MPC edition (top picture). Adding vinyl tyres wasn’t straightforward, but what could be done relatively easily (middle picture) was to chrome-plate relevant parts, which is what occurred with this Aston. But that wasn’t all. Racing decals were added, and a scene was printed on the side of the box showing a suitable backdrop, maybe the Pacific Coast Highway. There were even newly-tooled parts to make a stand to hold said background!

Some kits went even further. Although this could be deemed sacrilege, many veteran cars had customised parts added as well. The 1907 Lanchester (bottom) had a blown Chevy V8 engine added, along with racing slicks!