PARIS AIR SHOW AND THE AIRBUS A380 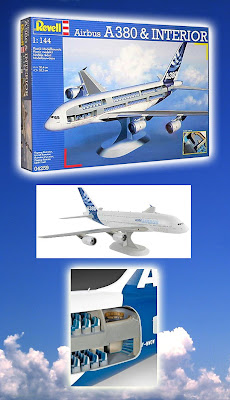 This week, it’s the Paris Air Show at Le Bourget, on the outskirts of the French capital. It is the biggest airshow in France and takes place every two years, alternating with Fanborough in the UK. Le Bourget is primarily a trade show, where plane-makers compete like polite pit-bulls, whether it’s airliners from Airbus and Sukhoi, or combat planes from Eurofighter and Lockheed Martin.

Le Bourget has seen headlines away from the flight-line too. On this day in 1961, famous ballet dancer Rudolf Nureyev grabbed the opportunity to escape from the repressive Soviet Union, and defect successfully to the West.

For modellers, Le Bourget is a fantastic opportunity to photograph the aircraft and collect details. It doesn’t stop at ‘things with wings’ either, for the show is also strong on space achievement, with major displays from the US, Europe and Russia. And with other countries, such as China, India and Japan becoming spacefaring nations, they too put on a show.

Even so, aircraft are stars of the show, and the biggest of the lot is the Airbus A380 double-deck jetliner. For modellers, there is now a reasonable choice to be had, though the A380’s sheer size means that it's unlikely you’ll ever see a 1:72 scale kit in the stores - even at 1:144 scale, the wingspan works out to some 555 mm (nearly 22 in).

Of the A380 models available, probably the most interesting is the 174-part ‘visible interior’ version, by Revell Europe. Seeing inside (port side only) is particularly interesting because of the two-deck configuration. It’s a pity that there isn’t a below-decks cargo hold underneath though. Filled with pallets, it would set the whole thing off superbly - maybe that’s an idea for a kit-bashing project.