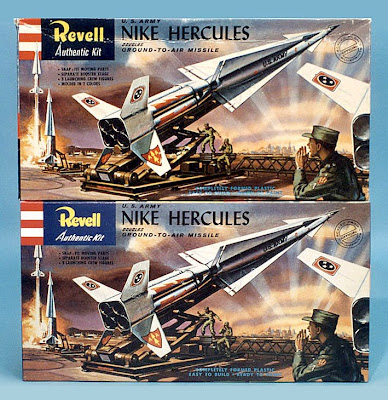 Reissuing kits isn’t new, but many collectors wanted not only the plastic but the whole paraphernalia that went with the original issue - plans, decals and especially, the box. To this end, Revell and Monogram started their Selected Subject Program (SSP) in the 1990s to recreate some classic kits in exactly this manner, and by 1998 had reissued over 300 kits in virtually original packaging. By then most that could be reissued had been, so the SSP idea ceased as a regular event, although recent years have seen a few reissues in the general catalogue.

The idea of SSPs was initially confined to the USA, but Revell GB (when there was a Revell GB - it ceased as a separate entity in 1997) issued its own range, and now Revell-Germany has taken a similar line with its current ‘Classic Kits’ range. These are not quite the same as the American SSPs, as the boxes are not absolutely identical, but they do use the original artwork. There were ten kits in 2008, and 2009 will see a further ten. To date, half of these have arrived (top picture). Four originate from Revell itself, while the 1:32 scale 1928 Rolls Royce Phantom I is a Matchbox kit, Revell-Germany buying the Matchbox kit brand in 1991. Initially the Matchbox name was retained on the boxes, but gradually many kits were absorbed into the main Revell brand, which is what has happened with the Phantom.

Other Revell-original kits in this first batch are the USS Burton Island, one of the original Revell Inc kits from the 1950s, (it first appeared as the icebreaker Eastwind). The 1:32 Bf109F reappears, as does the Nike Hercules surface-to-air missile. The latter uses box art from a sample I loaned from my collection to Revell-Germany (top box in the pair above). Unlike previous reissues - such as the SSPs - the new issue shows the whole image of a distant missile being launched on the far left. Previous issues had cut off the nose, under the Revell logo!

The final issue of this batch is the Fairey Rotodyne; it’s arguably the most interesting, as the kit hasn’t seen the light of day for many a year. Three similarly-scaled kits were available during the Rotodyne’s heyday - 1:72 scale ones from Airfix and Frog, and the slightly smaller 1:78 Revell, but the fully detailed interior gives it an advantage over the others.

You can visit Revell here.