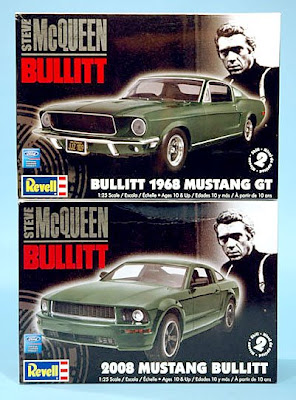 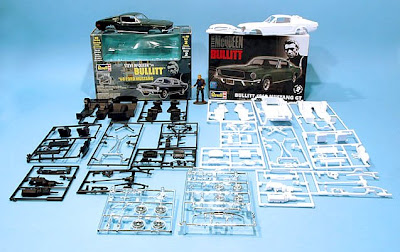 Ask anyone to name a movie car chase sequence and (unless their tastes are very strange) the one that comes top is usually the duel between the 1968 Ford Mustang and Dodge Charger in the Steve McQueen movie Bullitt. Oddly though - especially considering the number of other ‘star cars’ available - neither car appeared as a kit for many years. In fact the closest you got was a set of the correct license plates, produced in etched brass from the UK company Miniature Autobits in 1987, but this left you to provide your own Mustang and Charger, probably from AMT and MPC kits.

Revell amended this situation slightly in 2000, when it issued multi-material versions of both Mustang and Charger. These were available as kits with mostly plastic parts and pre-painted metal bodies, or ready-built, with figures. But there has not been a conventional plastic kit until now, when Revell has gone half-way there with the Mustang, and has adapted the metal body tooling and produced it in conventional plastic.

The two new movie tie-ins (top picture) feature the original 1968 Ford Mustang, and the 2008 ‘new’ Mustang. The 1968 model is a re-tooling of the earlier metal-bodied kit, while the 2008 model is based on brand-new tooling.

There are plenty of differences if you compare the metal-bodied Bullitt Mustang (left in the lower picture) with the new all-plastic version. Besides the obvious changes to the body, other details are that the exhaust system is no longer painted, while the chrome runner for the new kit has modified wheels and the extra parts - lights etc - that were on the original completed body. The Frank Bullitt figure comes only with the metal ready-built, not the kit.

Now all we kit builders need is that Dodge Charger!