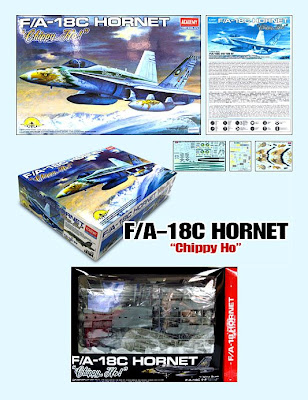 Academy’s neat 1:72 scale Boeing F/A-18 Hornet (and its hugely bigger 1:32 scale cousin, shown top above) is an example of ongoing product improvement, with extra parts and excellent third-party Cartograf decals. For anyone who has assembled one of these bigger Hornet kits, the time-lapse video above is a reminder of the complexities of putting together the real thing.

Like all big aircraft projects, construction and assembly of the Hornet is an international business, with parts big and small arriving at the assembly hall from thousands of separate suppliers. The final flying machine is a triumph of systems integration.

However, this approach doesn’t always work the first time. For example, on the much-delayed Dreamliner passenger jet, Boeing has had real problems with the supply chain - among other issues, thousands of fasteners had to be replaced. Still, Boeing reckons most of these problems are now solved, and the company aims to have the new jet taking off on its maiden flight later this year.