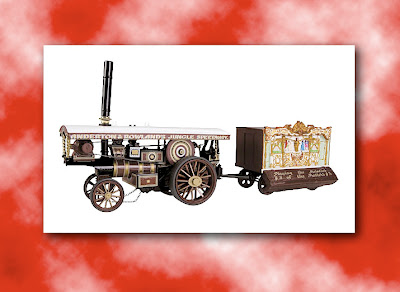 On a traditional note, Corgi has released a Limited Edition - 1000 pieces - of the 1:50 scale Burrell Showman’s Traction Engine, in Anderton & Rowlands markings. Aaah, the age of steam! Companies like Burrells were leading-edge motor manufacturers a century ago, and carried on making these great steam machines until 1928. And it wasn’t just road haulage either - traction engines powered all sort of things in those days, from saw mills to bacon slicers, though this Corgi one pulls a miniature steam organ.

Corgi’s models are pretty good, though it would be super to see a few operating features creeping in - this one is just begging for a sound chip to give small-scale puffing steam and organ music. The last real one we saw was brightly lit up with rows of chasing light bulbs, so a bunch of tiny LEDs could be another feature to add. We’re only suggesting Corgi, and you’d have to do it carefully, to add to the ‘scale modelness’ not turn it into a toy.