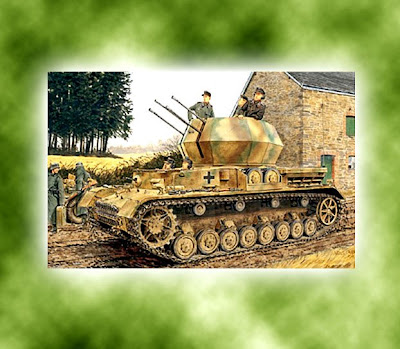 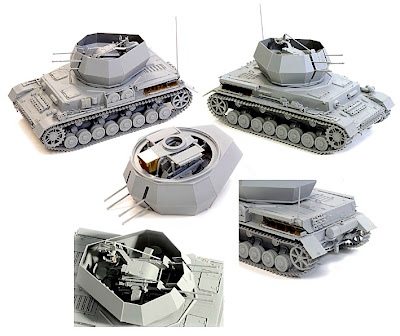 More goodness from Dragon in the shape of a 1:35 scale Flakpanzer IV, one of the deadliest mobile anti-aircraft weapons in the German World War II arsenal. The kit is not cheap - Dragon’s suggested price is £41.99 GBP ($49.95 USD) - which itself is a rod to bear for the poor old Brits and Europeans. At current exchange rates, they pay hugely more than the sums lucky US buyers are asked to pony up.

Ho hum, moan over: what’s the kit like? For the AFV fan, it’s a winner whatever the price. Much attention has been given to fine detail, with particular thought paid to the turret, both inside and out, with neatly applied simulated welding patterns a neat feature. The four-barrel cannon is a work of art all by itself, and many parts are optioned for plastic or photo-etched metal.

Down at ground level, the tracks are fully detailed on both sides, as are the drive wheels and sprockets. Photo-etch parts can be seen in the lower pictures, where they show up against the unpainted model.