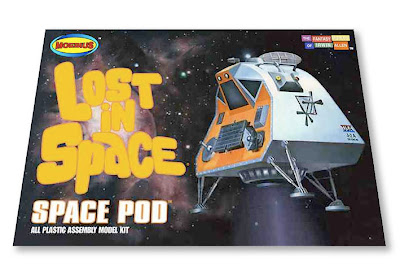 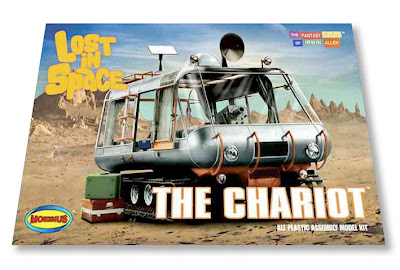 Forty years ago today, Neil Armstrong and Buzz Aldrin landed on the Moon, while Michael Collins orbited high above in the Apollo Command Module. The Lunar Module (LM) was a fragile aluminium-skinned bug-like contraption that was a true spacecraft, designed for operation in a vacuum with none of the smooth streamlined shape necessary for flying in a planetary atmosphere.

There are various models available for the LM, including Revell’s excellent 78-part 1:48 scale LM and diorama that we’ve shown here before. But there’s also another landing module available, a design that echoes the flavour of the real thing, even down to its insectoid triangular windows, and that’s the Space Pod from the third and last series of the 1960s TV show Lost in Space.

The Space Pod (top picture) comes in big 1:24 scale from Moebius Models, a company that also makes the Lost in Space Chariot ground vehicle to the same scale (bottom). The Moebius Space Pod features an opening hatch, so the possibilities for a diorama open up for spacesuited figures stepping out onto a cratered landscape under the landing pads - or, since it’s a science fiction subject, you could add some colour and even exotic alien lifeforms to add some visual spice.