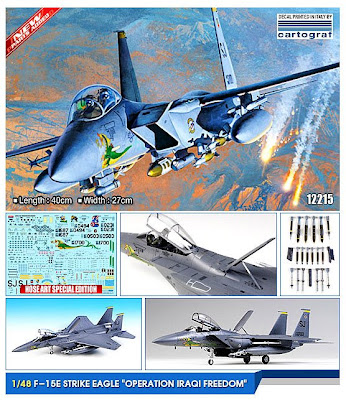 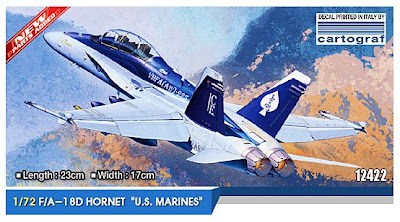 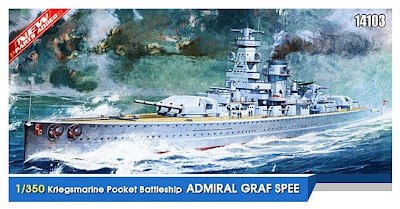 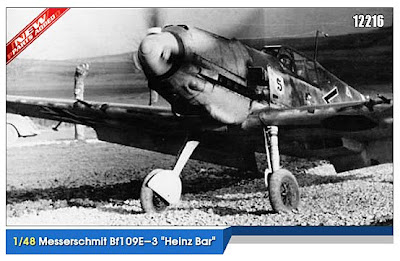 South Korea’s Academy model kits are on a roll this year, so SMN has no qualms about another post. Academy’s releases for the third quarter - July to September 2009 - show a mix of subjects and kit extras. From the top then -

The ever-popular F-15E Eagle is presented in improved form, with a neat set of Iraqi Freedom ‘nose art’ markings made by the respected Cartograf specialist decal-maker from Italy. Canopy and dorsal air brake of the 1:48 scale model can be posed open or shut, there’s a full set of weapons to hang under the wings.

Matching the improved status of the F-15E in a smaller scale is the 1:72 F/A-18D Hornet. Once again, Cartograf has been commissioned to produce a very fine decal set, and many kit parts are new or polished up. It’s not the world’s prettiest jet, especially in two-seater form, but the highly successful Hornet should be in any modern jet collection - and this one should make up into a goodie.

For marine enthusiasts, Academy have a 1:350 scale World War II Admiral Graf Spee pocket battleship. As with the aircraft, the Graf Spee has been given new and improved parts, and the biggish scale will make it an impressive piece of naval history when displayed on a shelf.

There’s a final aircraft to bring this roundup to a close, with another German veteran from World War II, the 1:48 scale Messerschmitt Bf-109E-3. The box art hasn’t been finalised yet, so here we show a contemporary photo that shows off the splayed legs of the 109’s narrow-track main undercarriage. Like the other Academy releases here, the 109 comes with various new parts.

It’s great to see kit manufacturers refining their kits like this - constant upgrading of parts, and using outside decal sources really shows that companies like Academy care about their clients, which in this case is us modellers. It’s good to be appreciated!