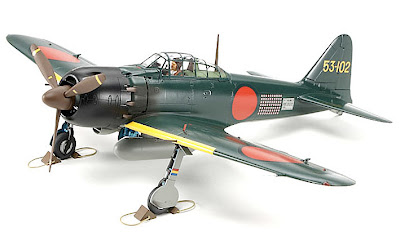 SMN gave a glowing review of the Tamiya Fieseler Storch in July, and here’s another finished 1:48 scale model from the same company. And this one lives up to the mini-tradition started by the Storch, in being a small-but-perfectly-formed treat for those of us who are too busy to do much ‘real’ model making.

Tamiya’s Zero has markings showing that it was flown by Japan’s top ace Tetsuzo Iwamoto, who flew with the Japanese forces from 1934-1945, years that included combat over China in 1938, and at the Battle of the Coral Sea in 1942. His personal diaries recorded more than 200 air-to-air kills.

The Mitsubishi Zero was introduced in 1940, at which time it was streets ahead of any other carrier-based fighter. But within two years, improved tactics and new aircraft gave Allied pilots the winning hand in air combat. Aircraft such as the F-4U Corsair and P-38 Lightning outclassed the Zero in almost every way.

Looking at the model, it’s obvious that Tamiya has really done its homework with this Zero. Neither arrester hook nor direction-finder are fitted, both items being removed when the aircraft was stationed at Rabaul, Papua New Guinea, the main Japanese base used for Pacific theatre air and sea forces. Other features of the Tamiya Zero include a nicely sculpted pilot figure in the cockpit, an underbelly tank, and the neatest pair of wheel chocks we’ve come across.