CITROEN ROARING TO VICTORY IN THE 2009 WORLD RALLY CHAMPS? 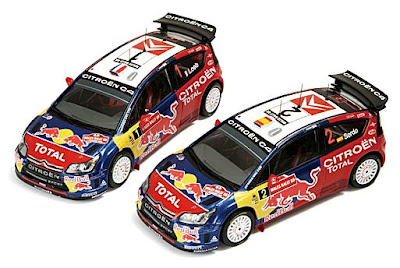 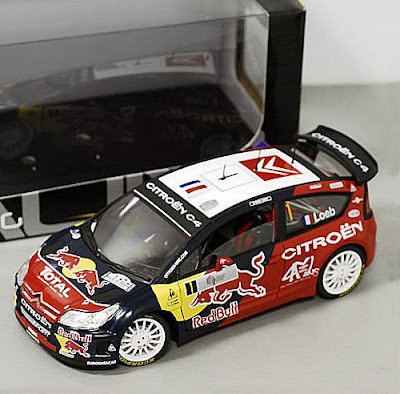 If you’re into rallying and the World Rally Championships (WRC), then Frenchman Sebastian Loeb is likely to be one of your star drivers. He’s currently World Champion, having been at the top no less than FIVE years running. But not even the reigning champ gets it right every time, as the video shows. At the Greece rally stage this year, Loeb and his co-driver Daniel Elana barrel-rolled a spectacular five times before coming to a halt - unsurprisingly the car was a right-off, but both men were unharmed, which says a lot for the construction of their Citroen C4. The road version is a tidy little machine (Loeb and Elana drive a three-door coupe) that comes from the showroom fitted with a modish central digital instrument display and mini-spoiler built into the two-part glassback tail.

For model fans, the rally scene is well catered for, and there are rally cars in most standard scales and at hugely varying prices. By and large, vehicles with the latest markings are most expensive, with prices falling as they become ’last-year’ models. Diecast collectors are spoilt for choice really, but here are ones that look good to SMN.

The Ixo 1:43 scale team pair (top picture) are good little models in 2009 markings. Loeb’s machine is the one he drove to victory in the Cyprus rally - his 50th win. Extremely fine rooftop aerials, Red Bull markings, and the wide rally-style tail spoiler are all included.

The Citroen team waves the flag for France, so it’s good to see Solido from the home country making a decent C4 (bottom). This one’s to 1:18 scale and shows Loeb’s car in 2008. Like many large-scale models, it’s actually cheaper than smaller ones: to grab a bargain you could try the offering on eBay here.