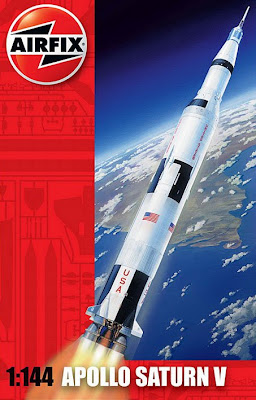 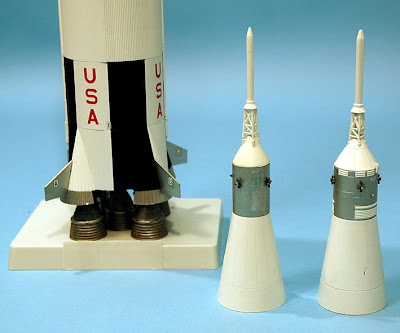 A MAT IRVINE REVIEW
About mid-August you should be able to buy the reissued Airfix Apollo Saturn V kit. You’ll immediately note that there is new box-art, showing the huge rocket heading for orbit. However, what may not be apparent is that this issue now has the upper - Apollo - sections corrected. All previous issues (and the kit was first issued 40 years ago, in 1969) have been incorrect.

It was wrong in two aspects. Firstly, the Service Module (SM) - the cylindrical part below the conical crew-carrying Command Module (CM) - was too thin. Consequently, this affected the Boost Protective Cover (BPC) that covered the CM at launch, and the Spacecraft Lunar Module Adaptor (SLA) that housed the Lunar Module (LM). The height of the SM was correct, but the diameter was too small.

The only kit from a mainstream manufacturer, (as against a ‘garage’ or specialist), with the Block II was the 1:32 scale Monogram Command Service Module (CSM). This has been recently reissued by both Revell US and Revell Germany - see SMN’s previous post on this subject.

But now you can add the Airfix kit to the ‘got it almost right’ list, even if corrections have waited until the 40th anniversary of Apollo 11. There are nine newly-tooled parts: the SM is new, and this has entailed new bulkheads, SLA and BPC. Just one niggle though - the Command Module has not been re-tooled, so its diameter is still too small, but frankly, you can’t see it anyway when the BPC is in place.

The pictures show the attractive new box-art (top), the assembled rocket (middle) and note here that the original rectangular base has returned. The bottom picture shows the new-tool Apollo parts (far right) compared to the old.