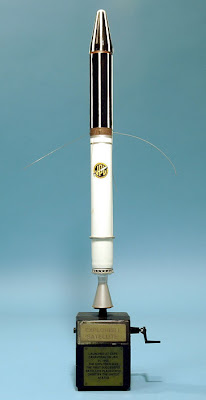 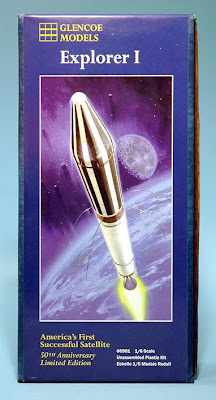 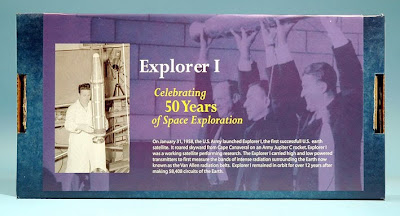 A MAT IRVINE REVIEW
One space anniversary that seemed to get lost in the build-up to this July’s Apollo 11 40th was last year’s 50th anniversary of America in space. Explorer 1 became the first US satellite when it was successfully launched into orbit on February 1, 1958, by a US Army Jupiter-C rocket, modified for the flight to become the Juno-1.

A 1:6 scale model of Explorer 1 was produced by the Ideal Toy Company (ITC) in 1959, only a year after launch, and this was quite a detailed kit. It not only had an opening outer casing to show off the interior, but sat on a stand that had a handle (top picture). Turn the handle and, via what was in effect an all-plastic musical box, it ‘clicked’ out the telemetry signal the satellite sent back!

The kit became quite rare, but those who wanted to actually build the model (instead of using it as loft insulation) were saved when Glencoe Models came on the scene. Founded and managed by Nick Argento, Glencoe reissues many of these old ‘collectible’ kits in a way you can actually build them – and the ITC Explorer 1 (middle picture) is one of these. The first Glencoe Explorer 1 was available in 1991, and it was reissued again last year as an Anniversary Edition, with additional information on the back of the box (bottom), as well as the original Glencoe artwork on the front.

The Explorer 1 Jupiter-C launch rocket (an ex-Hawk kit) is also available as a 1:48 scale kit from Glencoe.