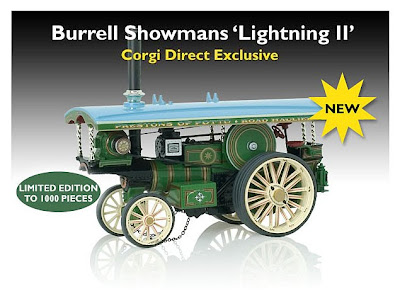 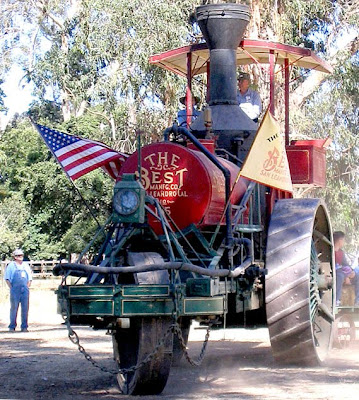 This latest Corgi traction engine is a Burrell Showman’s ‘Lightning II’ (top picture), finished in the bright green paintwork of Prestons of Potto. Like other Corgi steam transport diecasts, the Burrell is nicely made and finished, and the biggish 1:50 scale means that there’s room for lots of detail, including fine metal chains and neatly printed markings. It’s available only as an online special, with no sales at all through retail suppliers - so if you’re interested, go straight to Corgi Direct, via the link below.

The bottom pic shows a 1905 Best steam tractor, a popular US agricultural machine in its time, steam being the preferred choice for almost all heavy haulage and agricultural working before the internal-combustion engine was perfected. That so many of these old steamers are still in good working order is testament to the ‘heavy metal’ engineering of the Victorian age - things were built to last! If you’re in the UK, you can revel in the sounds and smells of it all at the Great Dorset Steam Fair, a must-visit annual event for anyone in visiting distance. It’s a five-day show, held from September 2-6.

Incidentally, Potto is a village in Yorkshire that earned itself a name in the 1950s for having a pub that never opened - you were allowed to go in for a drink only if the publican, a Mr Heslop, liked the look of you!