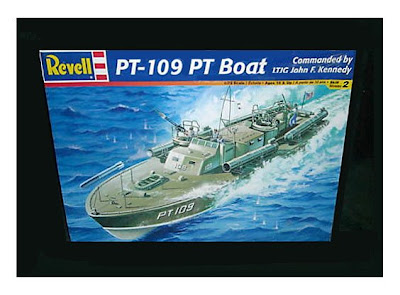 Watch this video in awe, as what starts out as an unprepossessing handful of white shards transforms into a super-real explosion, as a Japanese craftsman (sorry, SMN doesn’t know his name yet) puts the finishing touches to a 1:72 scale PT-109 torpedo boat display. The ingredients include bathroom caulk, as well as traditional materials; note how the finished PT-109 is displayed leaping out of the water, which gives the whole thing a dramatic look.

PT boats were built in World War II, to hunt down and destroy larger enemy shipping by firing torpedoes at speed. In fact a PT boat could become quite slow when barnacles built up on the hull, and the combination of wooden hull and gasoline engine fuel meant that a direct hit could end up in a deadly explosion, hence the nickname ‘plywood coffin’.

The PT-109 shown in the video was skippered by John F Kennedy, later to become US President. On August 2, 1943 - 66 years ago today - the 13-month-old PT-109 was run down and sunk by the Japanese destroyer Amagiri, and Kennedy’s actions in saving all but two of his crew made him a war hero. Incidentally, do watch out for the life-like 1:72 JFK shown at the 6 minute 35 second mark - it’s based on a photo of the time, and is a remarkable likeness at that scale.

The PT-109 in the diorama is a build of the decades-old Revell kit. It’s been beautifully detailed and the shots toward the end show what can be achieved, even with a venerable kit such as this.