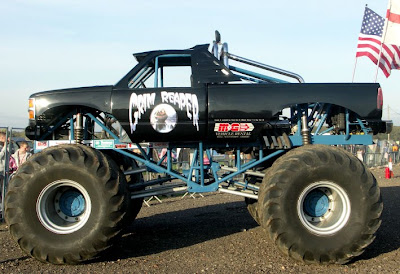 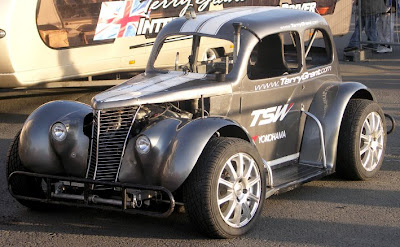 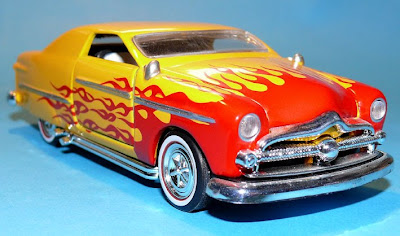 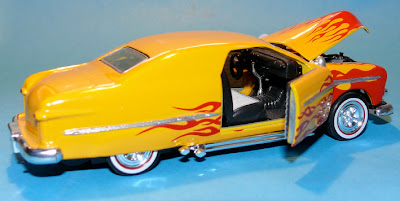 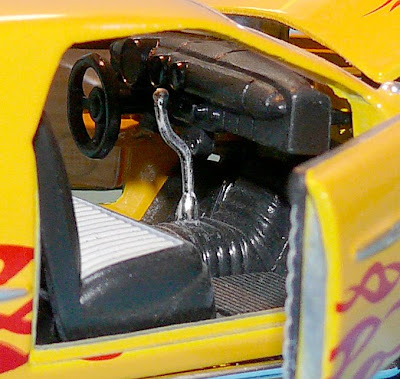 The best collector advice is always to keep your eyes open, no matter where you happen to be. And the tasty yellow custom Ford pictured above was a byproduct of a photo-video trip to the UK’s Santa Pod raceway, a honey pot for anyone who’s into the custom scene, with noise, speed, smoke and spectacle as bonus extras.

The Grim Reaper monster truck (top picture) was among the stars there, as was Terry Grant’s modded 1937 Ford Sedan (next picture). This gunmetal-grey beast could pull smoke-n-spin donuts to order, seemingly on the head of a pin.

Santa Pod’s stores are way better than those found at most race tracks, and lurking behind ‘real money’ dragster models, SMN came across this very nice 1:36 scale 1950s-era Ford Custom Street Rod made by the Chinese Tin Toys company, priced about the same as a couple of cups of coffee.

The 135 mm (5.3 in) long model has opening doors and hood, plus a decent stab at an engine and interior (bottom); the underside is nicely detailed and SMN was pleased to see that the model is an ‘Official Licensed Product’. The side-pipes could do with some careful work with a model drill, to open them up for a more realistic look, otherwise the neatly flamed Ford is a decent model. And for those who like added play-value, it’s even got a pullback-and-go motor tucked between the rear wheels!
Email ThisBlogThis!Share to TwitterShare to FacebookShare to Pinterest
Labels: Ford Custom Street Rod, Grim Reaper, santa pod, Tin Toys
Newer Post Older Post Home