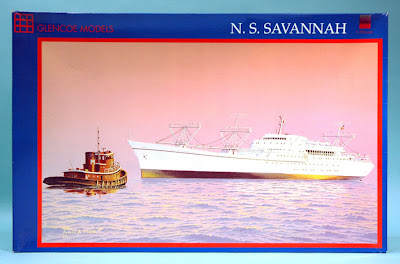 Sounds like a headline for the latest techno-whizzery, right? Well, actually the NS (Nuclear Ship) Savannah completed her maiden voyage on this day back in 1962, at a time when the US was pursuing the ‘Atoms for Peace’ program, the idea being to beat nuclear swords into ploughshares for the benefit of all.

Nice words, but while the Savannah was a handsome vessel and a technical success, she was expensive to run and carried far less cargo than a conventionally-powered ship of the same size. Today the Savannah is classed as a National Historic Landmark, but is not presently open to the public.

Several companies have made Savannah models, the best known of which is probably the Revell 1:380 scale kit, first released in 1958 (top picture). It was a detailed model, with a nuclear reactor, movable propeller and rudder, plus swivelling cargo booms. There was a display stand and even a small sheet of metal-foil to simulate water in the ship’s swimming pool. Revell also added a small booklet called The Story of Ships.

As a classic kit, the Revell fetches good prices. A good condition original can fetch $175 USD (£106 GBP), though later reissues (middle picture) are worth less.

Other Savannah models include an 'Adams Action Models' offering. It was the company's only model of a ship and also featured a scale nuclear reactor under the hatches. Rocket launchers were amongst Adams' other products, and the Savannah fitted nicely with the general 'futuristic' approach of the 1950s. Another kit was made by ITC, and this was reissued by Glencoe Models in the 1990s (bottom).