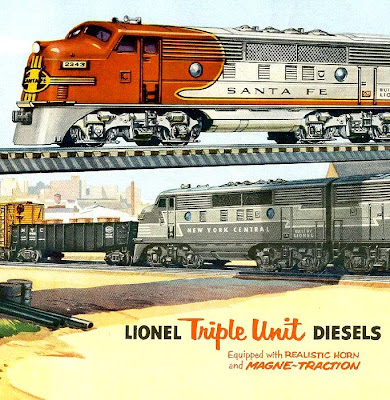 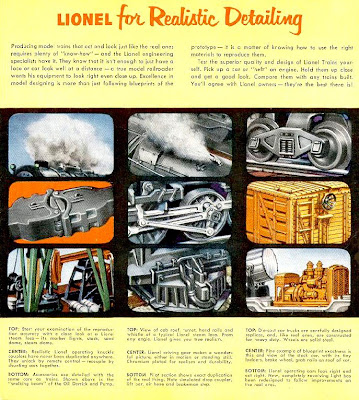 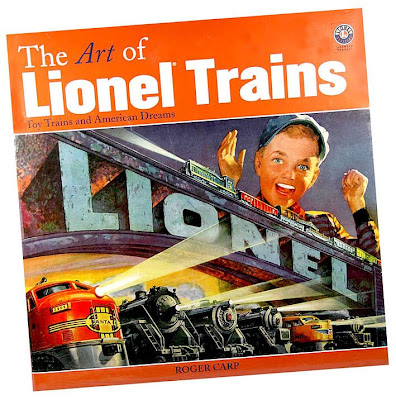 SMN came across an unexpected find at a British boot sale recently - a Lionel Lines railroad collection, including an ultra-rare 1952 brochure. The find itself was unusual, as British rail fans are not noted for a big interest in 0-gauge Americana, but to come across a good-condition paper item more than half a century old was a real treat.

Leafing through the brochure’s luscious pages we find a pair of ‘Triple-unit diesels’ (top picture) and a neat ‘Realistic detailing’ feature. The diesel units are true ‘romance of the rails’ stuff, and for anyone who has ridden a streamliner through the Rocky Mountains, seeing this sort of thing is a total nostalgia-fest.

Sitting in a dome car at midnight, drinking in the view of snowy peaks and diamond-hard stars, set off by the car’s dim blue floor lighting is definitely golden memory material, as is sitting in the club car, swirling a Jack Daniel’s while listening to the guitar music of a talented stranger...

SMN has also recently sourced a handsome 2003 book called The Art of Lionel Trains by Roger Carp (bottom), which packs in a wealth of information on the company’s marketing efforts down the years. We’ll be looking closer at this book in the near future.