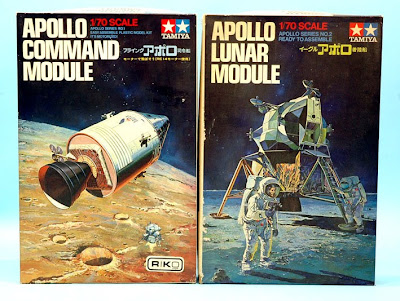 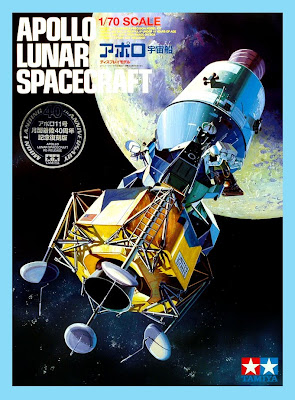 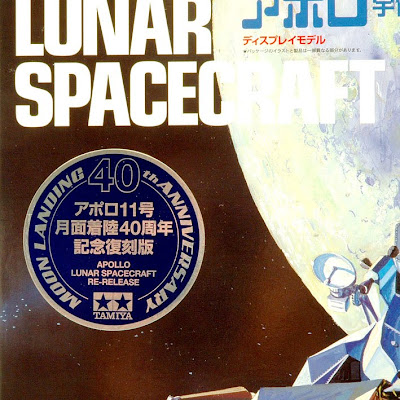 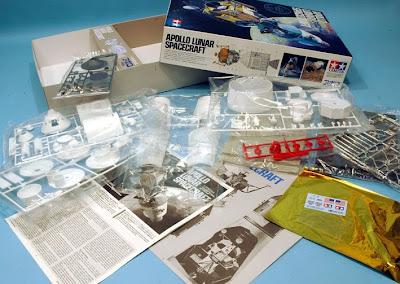 A MAT IRVINE REVIEW
The 40th anniversary of Apollo 11 has bought reissues of many original Apollo-era kits, and the latest is the first-ever reissue by Japan’s best-known model name, Tamiya.

In 1969, Tamiya issued three kits of the Apollo spacecraft. These consisted of a CSM Command/Service Module (kit number A-101), the LM Lunar Module (A-102), and a third kit (A-103) that featured these two combined. The bonus with A-103 was that you also got the SLA Spacecraft/Lunar Module Adaptor, which was a conical section that contained the LM during launch.

Tamiya’s 2009 reissue is of kit A-103, and you get two versions of the SLA - one in white plastic, one in clear. There are also two separate bases, one for the CSM-SLA, the other for the LM on the Moon, with two astronauts that came with the original LM kit, A-102.

However, what you don’t get this time around is one of those gimmicks that the Japanese kit industry delighted in, especially in earlier years - the CSM in kit A-103 was motorized, and you could fly it round the room! A small electric motor was tucked inside the Service Module, and a two-bladed propeller stuck out the back of the engine bell. You hung the spacecraft from the ceiling on a nylon line, and watched it circle around! Many of the action parts are still included in the box, but there is no motor, switch assembly or propeller.

A copy of the original plans are supplied in Japanese, but - if your Japanese is not up to scratch - you get a new English supplement that takes you through the various construction stages. This also explains the business of the original motorization, and the fact that it’s no longer in the kit.

Also included this time around is a sheet of gold foil, and a clear sheet for the small windows in both the CM and LM. Some parts are also still chrome plated, which may seem odd, but these are mostly for the LM legs and struts, a number of which were covered in silver foil, so the chrome could be left ‘as is’ to simulate this.

The kit is to the slightly odd 1:70 scale, as it comes from a time when many Tamiya kits were in metric, not imperial, scales. But of course, it is very close to 1:72, the same scale as the Airfix LM and a great deal else besides. Perhaps odder though, is that Tamiya has made so few factual, real-space kits. Besides this, the only other space item has been the 1:100 scale Space Shuttle Orbiter.

The photos show, top to bottom:
* Original 1969 boxes for the separately-issued Apollo craft.
* The new box with 40th anniversary label.
* Contents of the new box - the red parts are a somewhat odd shade for the LM pads and Descent Stage engine bell, but are the same as they were back in 1969.

Thanks to The Hobby Company, which supplied the review kit and which distributes Tamiya in the UK.