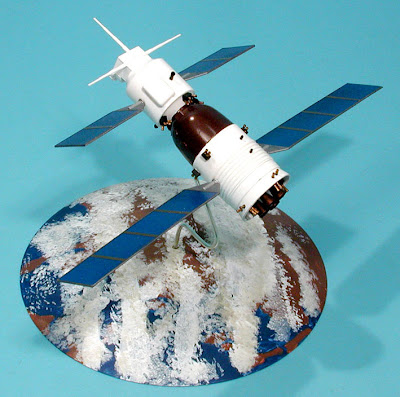 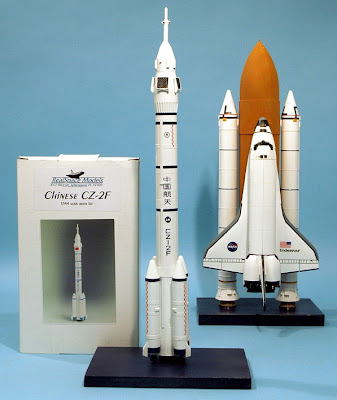 A MAT IRVINE REVIEW
A year ago today, China’s space ambitions took a big step forward with a spacewalk, taken by one of the three crew aboard the Shenzhou 7 spacecraft. China had become the third humans-in-space country five years before in 2003, when Shenzhou 5 carried the first Chinese taikonaut, air force pilot Yang Liwei. Shenzhou 6 followed in 2005.

Because of the difficulty of translating Chinese into English, various terms for their astronauts have been proffered, but ‘taikonaut’ - derived from ‘taikong’, Chinese for ‘space’ - is the one that has ended up in general use.

Getting details of the rockets and craft is not easy: it’s rather like getting information on Soviet rocketry in the Cold War years. However, the Shenzhou (‘Magic Vessel’ or ‘Divine Craft’) spacecraft is available as a 1:72 scale kit from Trumpeter, which is appropriate, as it is China’s main model kit company.

Shenzhou’s launcher is based on the long-running Chang Zheng, or ‘Long March’ rocket. Dragon, the Hong-Kong based model company, has issued two versions of the Chang Zheng CZ-2 to 1:48 scale, the CZ-2E satellite launcher and the CZ-2F Shenzhou launcher. At some 1220 mm (48 in) tall, the CZ-2F version is only a bit shorter than Revell’s 1:96 scale Saturn V, making it a contender as one of the world’s largest 'static space model' kits.

If you want a Chang Zheng rocket in the more widespread 1:144 rocket scale, Glenn Johnson’s RealSpace Models in the US offers a decent resin kit, complete with decals.

The pictures show, top to bottom:
1 Trumpeter 1:72 scale Shenzhou spacecraft, mounted on an included planet Earth base, here painted with simulated cloud formations.
2 Dragon 1:48 scale CZ-2F launcher, compared with the RealSpace Models 1:144 scale version. Both come with base mounts.
2 RealSpace Models 1:144 scale CZ-2F resin kit box at left, with the built model in front. A 1:144 Airfix Space Shuttle at back gives an idea of the large scale of the Chinese launch system.