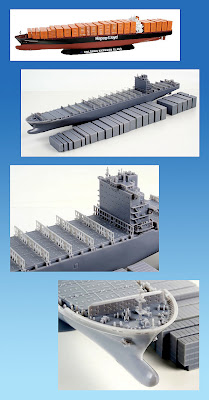 The kit comes in 226 parts, and measures 479 mm (18.9 in) long, which makes it a fair size, even at 1:700 scale. Revell supplies a complete deckload of containers, but if you prefer your ship with cleaner lines, then you can leave them off - it’s up to you. They don’t come as individual containers though (phew!), instead being supplied as 23 stacked blocks, which you can mix and match as you wish. There are five other ships in Hapag-Lloyd’s ‘Express’ class, and Revell supplies decals for all of them.

A nice choice of kit, and a change from all the naval stuff out there. Talking of which, here’s a chance for diorama-makers to show an Express ship defending itself from pirate raiders: “This is the Captain speaking - aim the Vulcan cannon and blast the scum out of the water...”

The Colombo Express is expected in model stores and online suppliers shortly; meantime Amazon has a range of Revell kits here.