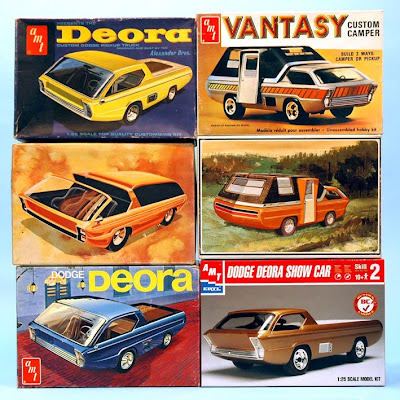 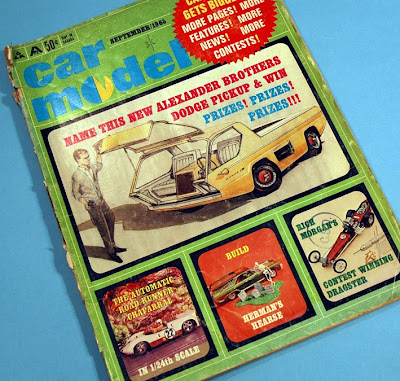 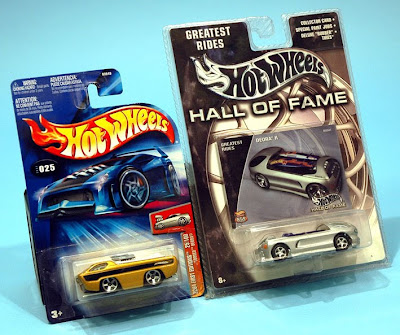 BY MAT IRVINE
Today, the Petersen Automotive Museum in Los Angeles is hosting a sale by RM Auctions that includes one of the most famous custom pickups of the 1960s, the wildly original Dodge Deora pickup truck. Designed by Harry Bradley and built by the Alexander Brothers, Mike and Larry, the Deora went public in 1965, when the magazine Car Model ran a competition to name it while still under construction. This was in the September issue, and by February 1966, the mag had a winner. This was a freckle-faced 13 year-old, David Hagedorn of Tacoma, who came up with the winning name, part-based on the Spanish for ‘gold’ (‘oro’), his efforts earning a pile of over 40 AMT kits and a stopwatch.

The Deora was based on the Dodge A100 pickup, a workaday vehicle that the Alexander Brothers transformed into a radical low-slung cousin, painted a pearlescent gold. The Deora kept the Chrysler Slant-6 engine and running gear, but the standard cab was chopped right down. Most radical was the entry system - instead of side doors, the whole front opened up, much like station-wagon tailgate in reverse. To this end an actual Ford tailgate assembly was used - customizers never worry where parts come from. The upper section could lift, the lower section hinged on the driver’s side to open.

The Alexander Brothers were consultants to AMT at the time, so a 1:25 scale kit of the new custom was a natural, and this arrived on hobbyshop shelves in mid-1966. With over 100 parts, the kit built up in typical AMT style, with engine and chassis details, two different sets of wheels, operating entry doors and an optional clear roof for the pickup bed. There were some oddities though - the lower section of the front door didn’t open sideways: it folded down instead, presumably to make 1:25 scale operation easier. Also oddball was the empty pickup bed - the real thing was full of equipment to keep the vehicle working, a cover being used to hide it all!

The kit has been reissued at least seven, possibly eight times, the most recent being in 2001. It’s always remained basically the same, though some versions included surf boards, others changed the wheels, another was sold as a ‘topless pickup’ with the cab roof removed. A major option was added with the Vantasy version that supplied a stylish camper top.

The Deora didn’t escape the diecast market either. When Mattel introduced Hot Wheels in 1968 with a 16-model lineup, one of them was the Deora. As with the vast majority of Hot Wheels, each model was issued in a variety of colours and details, this initial issue running to ten different colours; since then, there have been many others.

The later Deora 2 was designed by Nathan Proch specifically for Hot Wheels, of which there are at least 30 variations known. However, Deora 2 was a Hot Wheels original, and only after that was it built as the full-size show car at auction today. AMT does not currently have the Deora in its lineup, but you never know, a future reissue could see it back yet again.

The pictures show, top to bottom:
1 Six of the nine AMT Deora issues, all to 1:25 scale. At top left is the very first 1966 issue. At bottom right, the most recent, 2001 offering. The middle pair have no wording on the tops - it’s all on the sides. So you know, they are the Lil’ Covered Wagon (left) and the Custom Cabana (right).
2 Two assembled AMT kits: the pickup is an original issue from 1966. The flatbed cover’s woodgrain effect was supplied with the kit. The yellowy-gold colour was probably Testor or Pactra paint, not one of AMT’s own. The camper was built from the Vantasy kit.
3 Cover of the September 1965 Model Car announcing the ‘Name the Pickup’ competition. The drawing was likely a Harry Bradley original, or one based on his work. It accurately depicts the intended ‘gold’ colour.
4 Two Hot Wheels issues: at left a Deora, complete with two surfboards; at right the curvier Deora 2.

There are plenty of Hot Wheels Deoras about. Try this eBay selection here.