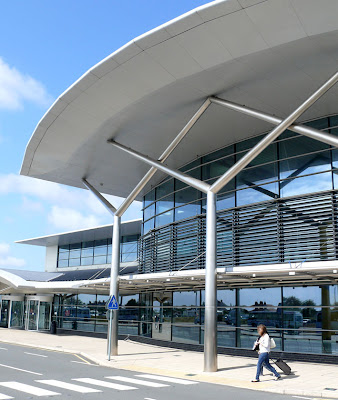 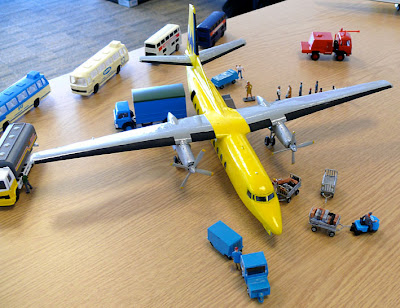 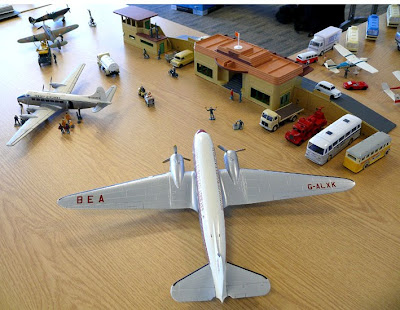 A few days break for the SMN crew on the Channel Island of Guernsey saw us fed and exercised, ready for the Dash-8 flight back to mainland Britain, via Guernsey’s small but sleek airport (top pic). Luckily we were there in good time, so when we spotted a small sign proclaiming 'Model Show', we nipped up to the mezzanine floor to hunt it down.

And it was a really worthwhile side-trip - lots of model planes, both kit-built and diecast, were laid out in a fair-size room overlooking the apron below. A 1:72 scale F-27 was a nostalgic reminder of an inter-island jaunt between Mallorca and Ibiza many years ago. That early-morning flight was packed with Spanish suits, all snouting up the standard biz-man breakfast of the time - inky coffee, sweet pastry and brandy chaser, accompanied by deep drags on a foul-smelling cheroot. You could barely see down the cabin for swirling tobacco smoke!

Other Model Show highlights in Guernsey included a nice scene featuring an Airfix 1:72 de Havilland Heron, and a Douglas DC-3. Some collectible classics from the model rail world - Hornby-Dublo rail buildings, including a station and signal box - had been pressed into service as airport buildings, and they fitted surprisingly well, too. The signal box in particular really looked the part, with sleek 1950s post-deco styling that fitted perfectly with the propliners on display.