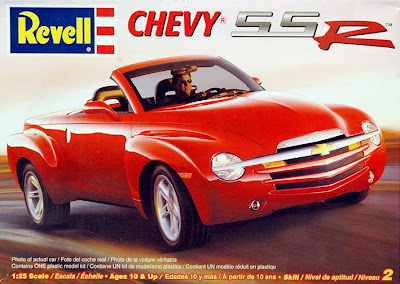 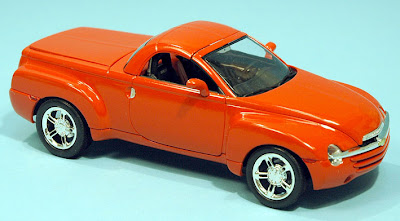 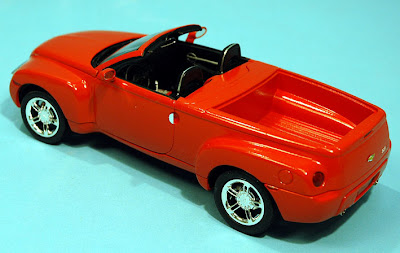 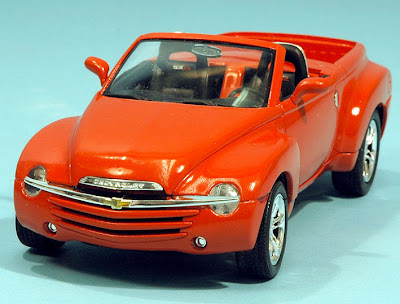 A MAT IRVINE REVIEW
Retro is ‘in’, especially when it comes to cars designed with the past in mind. In the US, it started with Chrysler’s Plymouth Prowler and PT Cruiser, then rival GM took up the challenge and created the Chevrolet HHR (Heritage High Roof) and SSR (Super Sport Roadster) convertible pickup. SSRs were made between 2003 and 2006, although sales were not as high as GM hoped for. The chunky but more practical HHR is currently still in production, though it hasn’t yet been kitted. However, Revell has produced a very nice 1:25 scale model of the SSR.

The Revell SSR is moulded in white, grey and black plastic, plus clear and transparent red, and a chrome-plated runner for those shiny retro parts. The kit is new-style in the accurate way it goes together, and even comes with the interior tub tucked into the bodyshell to show its final position - though that could equally be just for ease of packing!

These vehicles really need to be finished in some distinctive colour, but the SSR’s plans say only ‘red’. For the model shown here, I opted for a Testors enamel spray, Sunburst, which looks more or less as the name, a very bright reddish-orange. The shade was originally one of the ‘Colors by Boyd’ range, but these have now been incorporated into the ‘Car & Truck Enamel Paint’ range. The SSR has optional decals for pinstripes or white panels, though these were not applied to this particular model.

So far as working features go, the real SSR has an electric roof that folds into the trunk when the driver wants to let the sunshine in. The kit is non-working in that respect - the hardtop doesn’t fold, but you can remove it and pretend it is stored! All in all, The Revell SSR is a nice little kit that assembles well, and looks pretty much like the real thing.

Talking of the SSR’s folding roof, I’ll do a piece soon on a splendid piece of retro-Americana, Ford’s extravagant Skyliner of the late 1950s, in which the whole hardtop - for what was a full-size sedan - retracted into the trunk, at which point it left virtually no space for luggage (but who cares...). Revell made a working model of the Skyliner way back, which actually had a working retractable roof. Those were the days!

You can buy the Chevy SSR at model stores and online suppliers, including Amazon here.