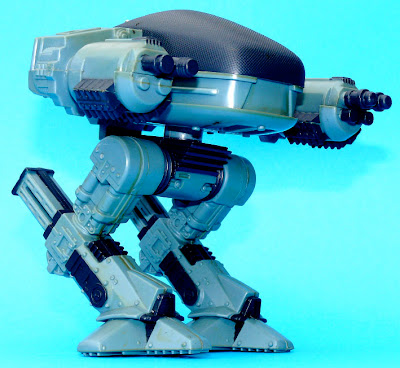 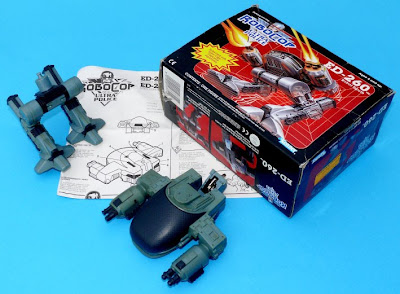 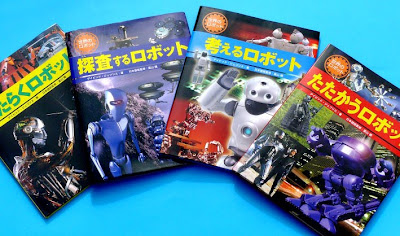 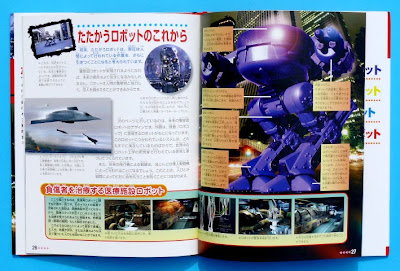 We were all smiles in SMN Towers yesterday when sample copies of a colourful book series, completed for Japanese publisher Holp Shuppan, appeared in the arms of our friendly postie. The books are a series of four called Robozones, and pride of place goes to the Robot Warriors jacket that features a model of the ED-209 robot from the movie Robocop - proof (as if you needed it ) that us scale model fans can get anywhere.

ED-209 started life as a cheap-n-cheerful clip-together toy, one of the ‘Ultra Police’ from Kenner, now part of Hasbro. SMN’s Mr J (David Jefferis) who authored the books, cleaned up the mouldings, assembled the parts (just two - legs and body, with a cap-firing trigger behind the head) and added a little paint detailing. Now ED-209 was ready to star in a photographic session, followed by a mega-dose of David’s favourite computer tool, Adobe Photoshop.

Using Photoshop, ED-209’s photographic image was removed from its plain studio background, and laid instead onto a suitable night-time cityscape. With that completed, extra details could be added with brush tools, highlights sprayed in, and reflections incorporated - in fact, a junior version of the special effects used in so many movies.

The cover designs for the series were completed in-house by Holp Shuppan’s designers, using images supplied by David, and a very good job they made too.

Robocop toys and models are around in droves, though ED-209 figures are rather thin on the ground, and this particular one is no longer marketed. Amazon has a selection of models, which you can browse here. You can also have a look at English-language editions of the Robozones books here.

INCOMING - SMN will be giving away a FREE ebook soon, and ED-209 will feature in that, so watch out for the offer to appear.
Email ThisBlogThis!Share to TwitterShare to FacebookShare to Pinterest
Labels: David Jefferis, ED-209, Holp Shuppan, Robocop, RobotWarriors, Robozones
Newer Post Older Post Home