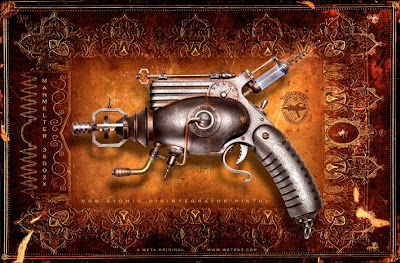 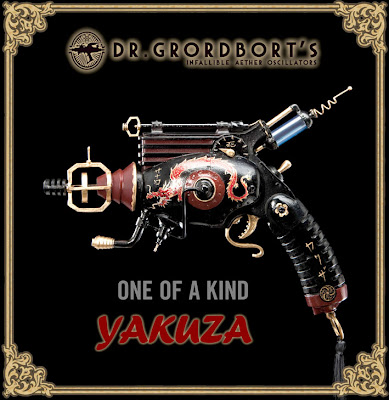 There’s a special kind of science-fiction called ‘steampunk’. It’s a fantasy mixture of Victoriana meeting high-tech, with airships, mechanical computers, and all sorts of other bits and bobs thrown in. And rayguns are part and parcel of the steampunk genre, as the pictures of ‘Dr Grordbort’s Infallible Aether Oscillators’ above make clear.

Dr Grordbort’s ‘weapons’ are actually non-lethal life-size models, designed by Greg Broadmore, conceptual designer at Weta Workshops, a world-renowned movie special-effects outfit based in New Zealand. Weta has done effects for many top movies, from King Kong to Lord of the Rings. The video gives an idea of what Greg’s about - and in particular the translation from a visual design to a ‘real’ object by the superb skills of Weta’s modelmaking team.

For sci-fi fans, having one of Dr Grordbort’s deadly rayguns on home display is something to aim for, though prices are not cheap - you’re looking at $690 USD (£420 GBP) for the Manmelter (top raygun pic). Then again, these are highly collectible items produced in a run of just 500, and each one comes in a superb display case.

Here at SMN Towers, we’re having a go at our own steampunkish raygun - we’ll post details as the killer beast takes form.

Find out about Weta rayguns here.