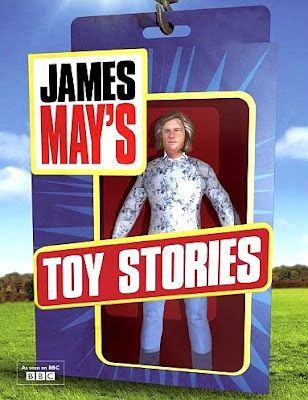 The success of the BBC TV series Top Gear is a worldwide phenomenon, but the three presenters, Jeremy Clarkson, Richard Hammond, and James May also have lives beyond motoring mayhem.

The TV series Toy Stories features presentation by James May, and includes such fascinating events as the creation of the world’s biggest Scalextric circuit, a 16-km (10 mile) stretch of model railway, and the building of a 1:1 scale plastic Spitfire kit, a clip of which is shown in the video above.

May’s relaxed style goes well with the subject and it’s a treat to see toys and models featuring on TV screens - we enjoy a popular hobby that’s been virtually ignored by broadcast media over the years. Toy Stories airs on BBC 2, starting this Tuesday, October 27.

And to go with the series, which was shot over summer 2009, here are a book and a DVD, both definitely worth a look.

There’s also a DVD of the series, due out end-November. You can pre-order it here.
Email ThisBlogThis!Share to TwitterShare to FacebookShare to Pinterest
Labels: Airfix, James May, Top Gear, Toy Stories
Newer Post Older Post Home