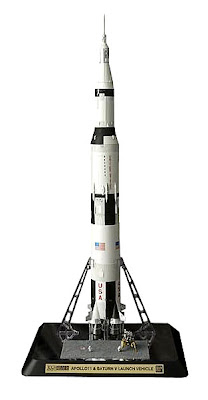 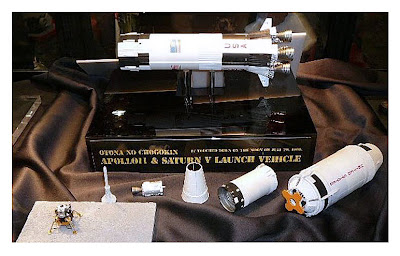 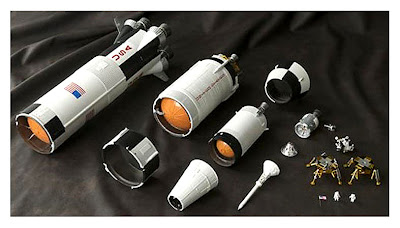 Ready-built models get bigger and better, and Japanese company Bandai’s 1:144 scale Apollo Saturn V just has to be the largest space item ever produced. The ‘full-stack’ Saturn is due in March 2010, and should have all space enthusiasts reaching for their credit cards, though it’s fair to say that the cost will likely be in the wallet-shredding $500-550 USD (£300-330 GBP) price band. Still, for something like this specialist mixed-material item, who’s complaining about price - after all the new Airfix 1:24 Mosquito is north of £120 GBP ($200 USD).

So what does Bandai supply with this 768 mm (30.25 in) high Apollo, produced in cooperation with the Apollo Maniacs website? Firstly, all sections separate like the real thing, including the cylindrical interstages. The Lunar Module (LM) can be linked to or separated from the Command/Service Module (CSM). As for display, the stand is mirrored so you can inspect the detailed Rocketdyne F-1 engine cluster at the base. There’s also an optional lunar surface base for LM, US flag and astronaut figures. A third stand allows the separated rocket sections to be displayed horizontally.

This looks like it’ll be a landmark product, and one we’ll be fascinated to see in closeup when it’s released.

Thanks to Apollo Maniacs for the video.