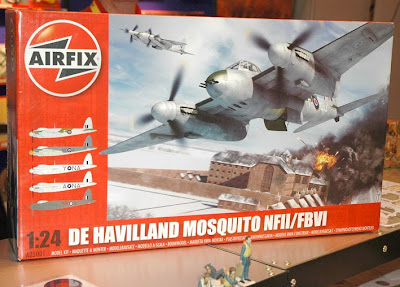 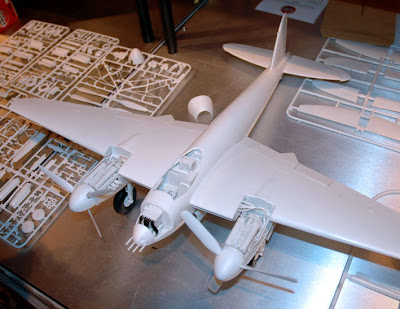 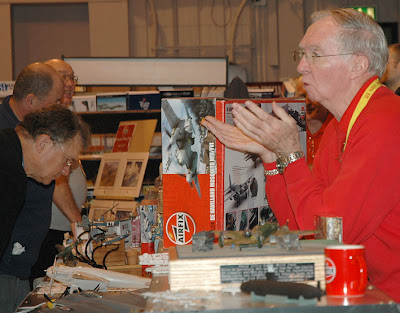 Report: Mat Irvine
The UK branch of the IPMS (International Plastic Modellers Society) held its annual National Meeting at the International Conference Centre, Telford the weekend before last. There were two main halls, plus a slightly smaller one used for the competition area. The main halls were packed with trading stalls and club stands, which incorporated SIGs (Special Interest Groups) the ‘Interests’ of which ranged widely - Korean War, seaplanes, NASA, Wallace & Gromit and much more besides.

One of the show's prime interests for aircraft fans was the sneak peak of what has to be the most anticipated model kit ever - the Airfix 1:24 scale de Havilland Mosquito. Airfix Product Manager Trevor Snowdon talked kits with customers, while in front of him stood the ‘wooden wonder’ (well, plastic in this iteration) itself, a Mosquito in part-assembled test-shot form. And very nice it looked, with pale-grey parts laid out around. The box was there too, and really showed off the excellent design trend exhibited by Airfix these days - brightly attractive for general buyers, yet clean-looking and serious for experienced ones. Just right.

The Airfix 1:24 scale Mosquito will be available shortly. Meantime, other Mosquito kits are available here.

The pictures show, top to bottom:
1 Box-art for the initial version of the Airfix 1:24 scale Mosquito.
2 Test-shot of the Mosquito on display.
3 Trevor Snowden, Airfix Product Manager and one of the driving forces behind Airfix since the Humbrol days, discusss models with a customer.

SMN note:
Mat Irvine took many pictures at the IPMS show, and we’re planning to release these in Freeebook form for you shortly. There are many tasty items, so keep checking for the Freeebook release.
Email ThisBlogThis!Share to TwitterShare to FacebookShare to Pinterest
Labels: Airfix, Humbrol, IPMS, mat irvine, mosquito, Telford, Trevor Snowdon
Newer Post Older Post Home