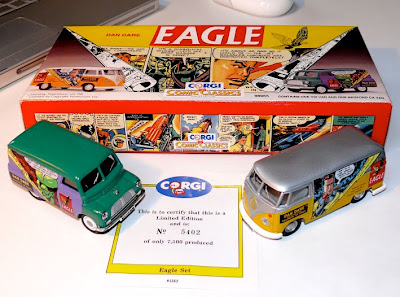 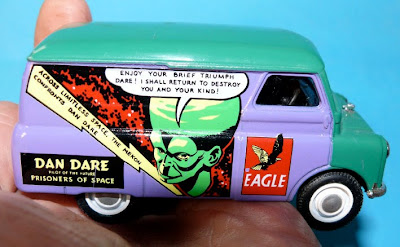 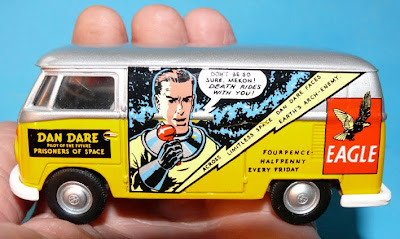 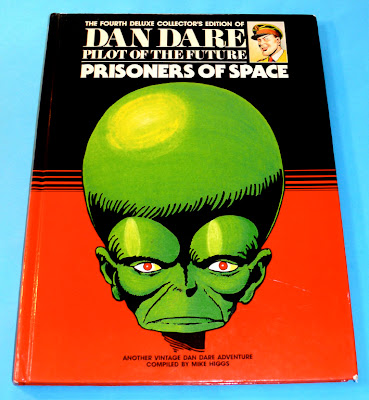 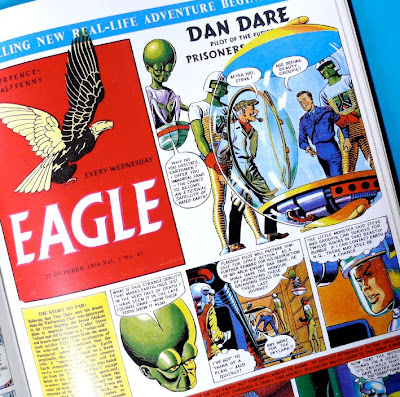 SMN chanced upon a handsome diecast two-vehicle boxed set last weekend, a cleanish example of a 1992 Corgi release featuring the lead hero from an old UK comic called the Eagle. Launched in 1950, Eagle was a mega-success, with weekly sales regularly exceeding a million-plus. Its quality production (half in full-colour) made the Eagle unique at the time of launch, as did its lead character: a ‘pilot of the future’ called Dan Dare, whose adventures battling evil aliens such as the ‘melon headed’ Mekon inspired an entire generation of young readers to look up to the stars. Sad to say, successive UK governments proceeded to trash much of the UK’s aerospace industry in the years that followed, but that’s another story...

The 1:43 scale Corgi set features Bedford CA and Volkswagen panel vans, emblazoned with pictures of Dan Dare and the dread Mekon. The diecasts themselves are of fairly average quality, but the bright decals and well-produced box packaging turn them into a charming collectible set for lovers of the genre. The images are taken from the year-long adventure Prisoners of Space that began in May 1954. It’s actually one of the less successful stories, with art that came nowhere near the levels set by Dan Dare’s creator, Frank Hampson, but no matter: Corgi made a fine job of decorating its diecast vehicles. The box works for its living too, with frames from a mini-adventure called Operation Triceratops running around the sides. This story was an eight-pager that ran in the 1954 Eagle Annual.

Is the set an investment? Probably not, as it’s worth only about £10-20 GBP ($17-35 USD) despite the limited 7500 production run. On the bright side, this price range keeps the set firmly buyable for Dan Dare and Eagle collectors.

Incidentally, in 1990 Hawk Books published a full-size reproduction volume featuring both stories. There are newer versions available from Virgin which are are cheaper, but reduced in size. Take your pick!

Have a look at the Corgi sets we found on eBay here. If they've been sold by now, a fresh search may bring up some replacements, and also try looking for the Hawk Books hardback if you fancy one.