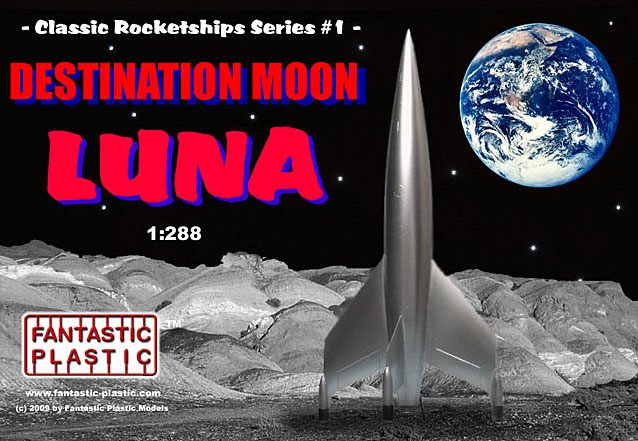 GEORGE PAL'S DESTINATION MOON MOVIE of 1950 was a classic of its kind. The acting was rather indifferent, but it did have a handsome spaceship, the Luna, looking like a sleeked-up version of a World War II German V-2.


SMN report: And that became the style of virtually all sci-fi rockets of that era, streamlined beauties that soared through the midnight depths of space.

If only it had turned out that way - here we are now, 40 years on from the Apollo landings, with a return to the Moon that seems further away than ever. Euro plans include human landing by 2030 at the earliest, while China and India may even end up beating the US back there. 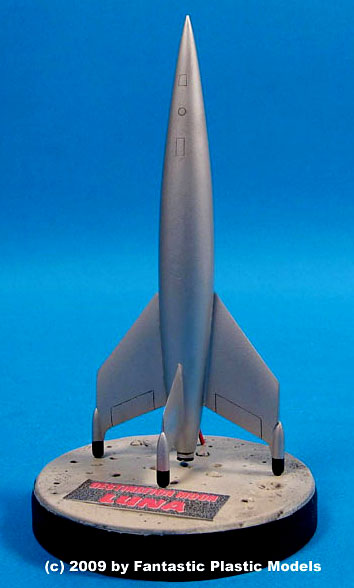 Still all that shouldn’t get in the way of a bit of nostalgia, and that’s the spirit of the 1:288 scale Rocketship Luna kit from Fantastic Plastic. It’s an ultra-simple piece of kit engineering, with just seven parts, including the meteor-pocked lunar surface base. One of these is a rather unpretty prop, to stop the nuclear-powered craft from falling over - it’s odd that the original Luna designers didn’t simply use a triangular pattern for the landing legs, a much more elegant solution.

Sprayed silver to represent the original’s bare-metal finish, and with some careful detailing on the cratered base, plus a little airbrush weathering around the airlock door, rocket exhaust, control surface and landing leg areas, the Luna should make a great addition to a sci-fi model collection.