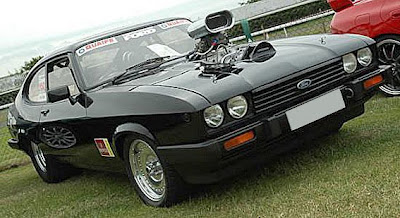 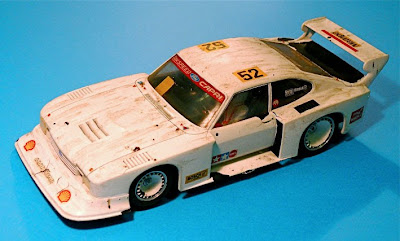 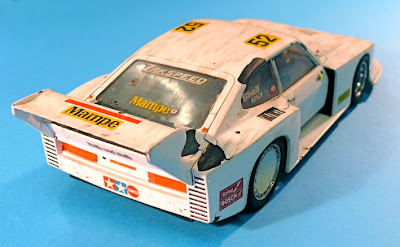 First off, let’s just say that Corgi has made a decent fist of the Ford Capri Mk3. Shape and proportions are pretty good, with neat detailing to the wheels. The real thing is generally reckoned as the best all-rounder of the Capri series, various models of which were made from 1961 to 1986. The Mk3 in particular was a well-balanced good-looker, and fitted the bill as a Euro-size mini-Mustang pony car. These days it’s reckoned as a collectible classic, though some still run in anger on circuits and dragstrips.

It’s a mystery why Ford let the model die - the Capri really ought to be in its Mk6 or 7 version by now - but there are rumours of a rebirth in a year or two’s time. Come on Ford! And another mystery is Vauxhall/Opel's great-looking Calibra - why did the company drop it so suddenly a dozen years ago?

Rant over, and back to the models. A trawl through SMN’s Vault of Ancient Models revealed the Tamiya 1:24 scale Zakspeed Capri, which was finished with a dinged and dented ‘dirt and grime’ look. The kit was a good one to build with absolutely no fit problems, and a driver figure that looks just right in the cockpit. The kit came complete with a rear-mounted electric motor that can still drive the soft rubber tyres. The real thing had its engine upfront, but at least Tamiya's neat underbelly detail included the bottom of the engine.

Amazon has a range of Capri models here - look out for the original ‘hairdresser style’ Ford Consul Capri from the early 1960s. Amazon has the Corgi model featured above at a small discount.